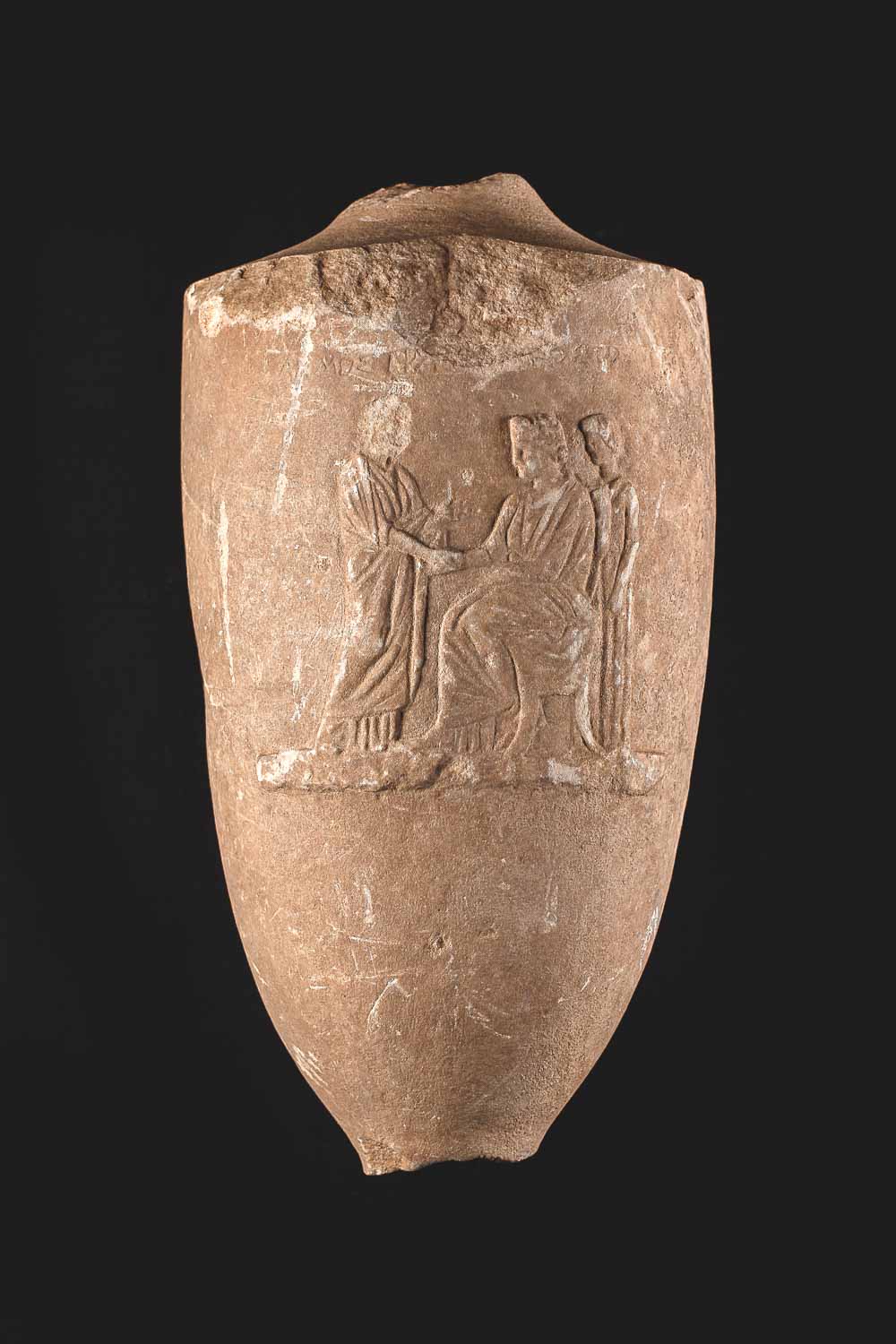 This fairly slender lèkythos has a body that gradually extends up to the shoulder, which is slightly curved. Carved in low relief on the front is a scene with three female figures: the standing figure on the left is shown in three-quarter profile facing right, she wears a chiton with and a cloak of thick material wrapped closely around her body. The right arm is outstretched to clasp the hand (dexíosis) of a seated woman of mature age and the left hand is also extended in the same direction with the open palm frontally visible. This second figure looks to the left on a chair with curved legs and a backrest (klismós). She wears a chiton and a cloak that is gathered on her thighs, the slightly inclined head is crowned with wavy locks and a large chignon at the back. Standing partially concealed behind the klismós is a girl or young woman facing left and clad in a simple tunic. She has a curvy-dressed short hairs. They are all details indicating a no-free woman from barbaric origins. The inscriptions above the heads of the standing figure on the left and the seated figure, respectively DHMOSTRA[TH and …]OSTRATH, indicate their names. It can therefore be suggested that the urn was intended to perpetuate the memory of the seated woman, whom name (… ]ostrate) is written with care above her head, and that the name Demostrate was added to identify the other figure at a later stage, perhaps on her death.

The three figures are amongst the most common iconographic types in the repertoire of Attic burial reliefs, but in this case, the left hand is instead stretched out with the palm open in the direction of the seated woman; a further reference to life in the privacy of the oikos is the frequent presence of a handmaiden, essentially an attribute of the mistress and indication of her elevated social status, who is the protagonist of the scene for few evidences: major dimensions compared to the others, a central position, the faraway look, which suggests isolation with respect to everything around her.

In formal terms, the scene is characterized by an execution typical of artisanal production, where a few quick blows of the chisel suffice to shape the bodies in low relief against the background and define the details. These elements suggest a date in the second quarter of the 4th century BC.