Statue of Hercules with Cerberus 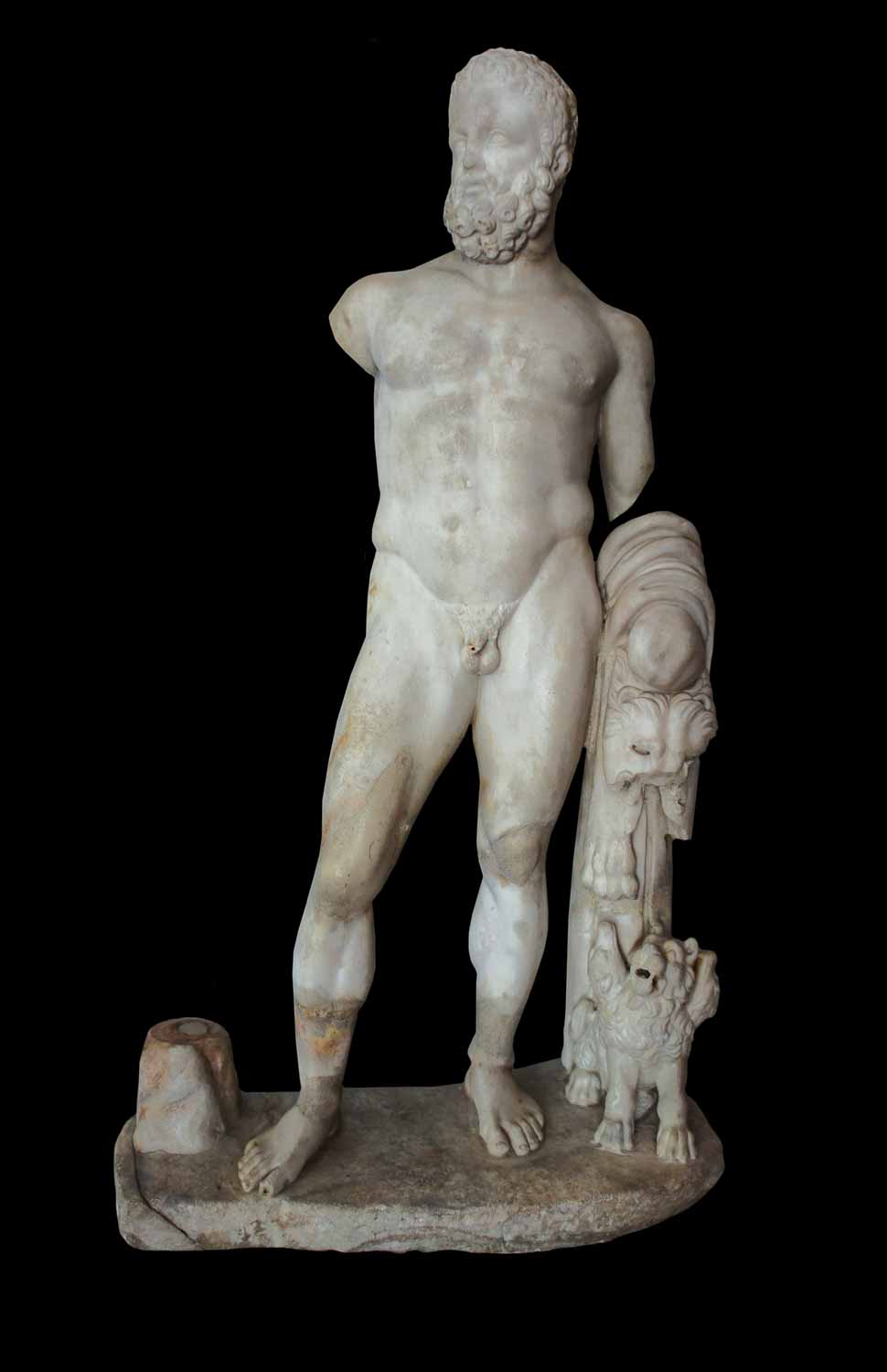 This sculpture of Hercules is of considerable interest not only for the size and substantial integrity of the work but also as further iconographic evidence of the importance of the cult of Hercules halfway through the 2nd century AD.

In accordance with the antithetical model of Lysippos, the god is shown in a state of heroic nudity resting his weight on the left leg with the hip slightly cocked, while the right is slightly bent and advanced laterally. It is towards this more relaxed side that the head and eyes are turned. While the right arm has been lost except for part of the shoulder, the left has survived. This must have been bent forward to hold the lion skin cape (the upper part is a restoration), which hangs down to cover most of the lateral support. The skin is folded over the left forearm with the front legs dangling down to the god’s knee and the head immediately above, as in many sculptures of the Lysippean school. At his foot is Cerberus, the three-headed watchdog of Hades that Hercules managed to capture alive and take to Mycenae. As this was his last labour, in the order given by Pseudo-Apollodorus, and the slaying of the Nemean lion the first, the sculpture thus encapsulates all the twelve labours in a single image.

The presence of a plinth in the form of a small tree stump beside the right foot can provide help in reconstructing the missing right side of the figure. Overall iconographic identity is indeed evident with the image of Hercules used for the divinity’s cult in the 2nd century AD as practiced on the Aventine hill in Rome. It is there, between the churches of Sant’Alessio and Santa Sabina on the corner of Via San Domenico, that the remains of a sanctuary were discovered in 1935 (reburied after excavation and no longer visible) attributed to the reign of Antoninus Pius and dedicated to Jupiter Dolichenus, whose worship was associated with that of Hercules. The cult of Jupiter Dolichenus, the god of Doliche in the Commagene (now part of Turkey), was introduced after Vespasian’s annexation of Syria (71 AD). Possibly similar to the Hadad of Heliopolis and the Malakbel of Palmyra, the god was represented in a Phrygian cap and the typical dress of Roman soldiers with a double-headed axe and bolts of lightning in his hands standing on a bull with an eagle between its legs. His cult enjoyed great popularity in Rome and throughout the Roman world, constituting an essentially military variant of the cult of Jupiter Optimus Maximus and being spread as a result by soldiers through the constant movements of troops. It is documented above all from the period of Antonine rule, when Syrian grain merchants built the sanctuary on the Esquiline hill and the Dolocenum on the Aventine.

Some sculptures and altars found in the latter demonstrate the connection between Hercules and the cult of Jupiter Dolichenus, both divinities being worshipped together by the faithful. A worshipper of the latter, the emperor Commodus also loved to present himself as Hercules. This sculpture of Hercules and the one found in the Dolocenum on the Aventine are evidently identical apart from the addition of Cerberus and the fact that they are mirror images, so that the head is turned towards the lion skin rather than the club. The missing right arm of our Hercules must also have held a club resting on the surviving small sup- port below. This iconography is attested also in reliefs and coins of the Severan era. The same image of Hercules is thus found in the architrave of the Arcus Argentariorum on the northwest corner facing precisely towards the Temple of Concord and a statue of Commodus as Hercules erected in front of the Senate for evident purposes of propaganda. Attention should also be drawn to the military and dynastic connotations of the iconography of Hercules in the works of the Severan era and in the statue examined here. The military aspect is not warlike here but concerned rather with the defence of peace. The Hercules Invictus of previous reigns thus became a Hercules Defensor under Septimius Severus, indicated as such on the denarius of 197 AD and then also on the aureus, represented alone with the legend Herculi defensori. This aspect is already particularly evident in the coinage at the beginning of 194 AD, few months after the entrance of Septimius Severus into Rome, and Hercules can therefore be seen as the dynasty’s patron divinity. We thus see the repeated presence of Hercules as iconographically portrayed in our work alongside the figure of Liber Pater in the coinage of Septimius Severus, on the back of medallions, aurei, sestertii and asses, where the legend dis auspicibus explicitly links them both as protectors and guarantors of Severan rule. Hercules and Liber were no longer only the patron deities of Leptis Magna, the city where Septimius Severus was born (Shadrapa = Liber Pater and Milk’ashtart = Hercules) but now closely associated with Rome, the empire and above all the imperial dynasty. The figure of Hercules is an evident reference to the Antonines, especially the Divus frater Commodus, and the combination of Hercules and Liber took on dynastic significance not only as joint protectors of the domus Augusta but also as guarantors of its continuity. The insistence on the brother gods served in actual fact to announce the new generation represented by the young Caracalla and Geta, as documented in their sculptural portrayals. These hopes were then dashed in 212 AD, when Caracalla became the sole Augustus after eliminating his brother and Hercules again appeared alone on coins. By virtue of its iconography, our statue thus forms part of the particular cult of Hercules that started with the Antonines and was then strengthened and expanded in significance with the Severan dynasty. Attention should also be drawn to the Lysippean distribution of weight present both in it and in the Hercules of the Dolocenum on the Aventine and the relief on the northwest corner the Arcus Argentariorum, albeit with a mirror-image reversal of the limbs.