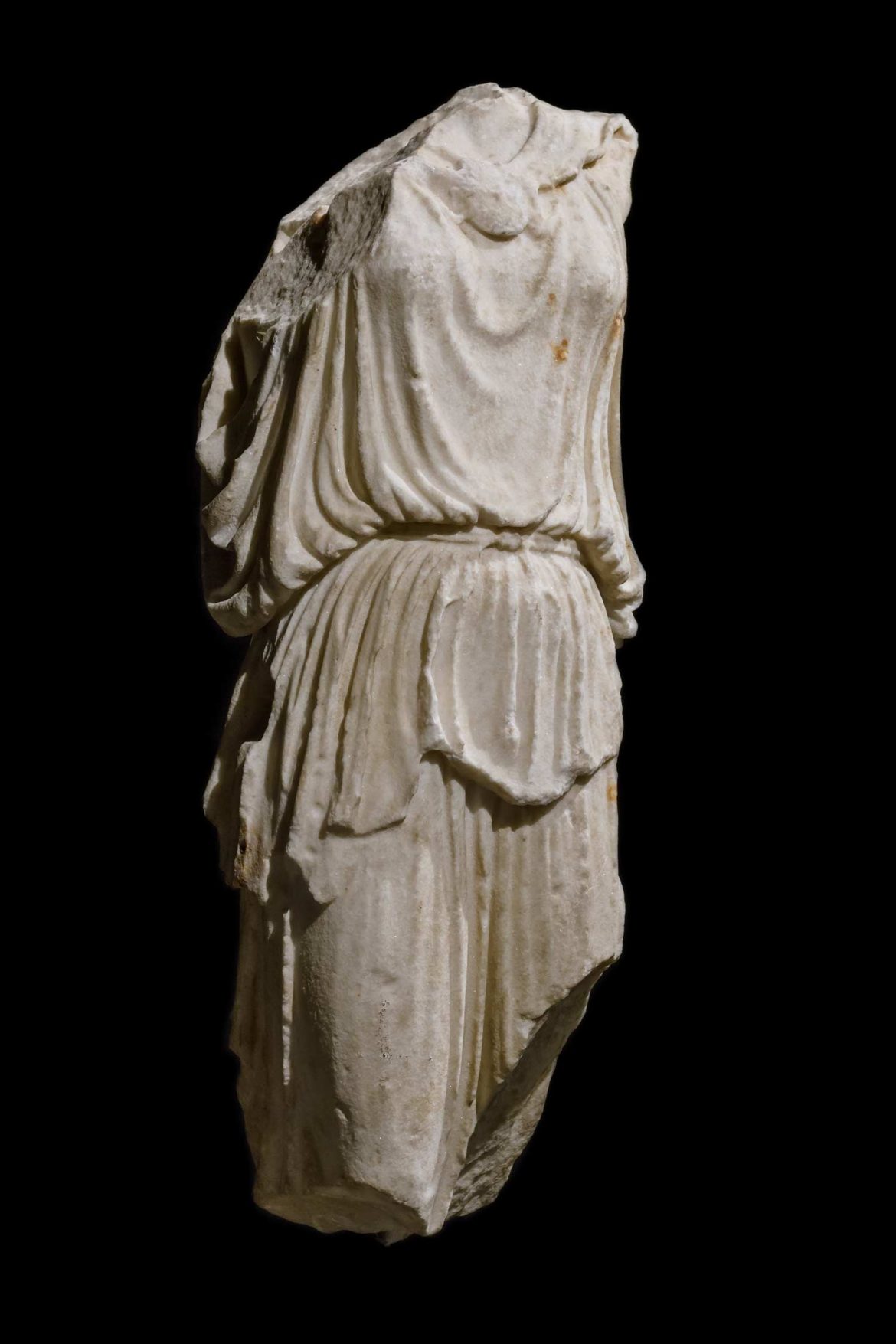 Although the sculpture is lacking many of its parts, this important feminine draped statue still presents a very good rendering especially on the incarnates and on the folds of the vest, moved by the wind. In fact, the figure is represented as about to land on the ground, with the drapery lifted behind. Thanks to the position of the lateral and rear folds it is possible to guess the movement of the figure which seems to have just put her feet on the soil. Judging from the attachment, the left arm was probably uplifted, while the right-one was presumably stretched forward, not adhering to the body. It wears a soft peplum tunic with apoptygma, tied on the waist at the attic manner, creating a voluminous roll- up. The apoptygma folds are wide and smooth; on sides and waist they get tighter, creating a chiaroscuro effect.

The shoulders are covered by a large Aegis, tight on the breast with a small Medusa-head buckle, sur- rounded by tiny snakes, a distinctive iconological attribution of Athena. The quadrangular holes on the back were used to insert the wings, characteristic of Nike, while the larger hole on the lower back was made to cling the statue to a support.

Thanks to Antonio Giuliano who firstly identified the statue and to Eugenio La Rocca who conducted in-depth research, it’s now possible to recognize the sculpture belonging to Fondazione Sorgente Group as an Athena-Nike, an original Greek carved around the half of 5th century BC, around 430 BC. A comparison of this statute with few other rare samples of Athena-Nike, fitted with the Medusa head buckle, allowed us to create again the complete image of the statue and it had been theorized that it could have been originally placed on a column or a high pilaster, as votive gift following a military victory (in Athena Nike: la vittoria della dea, Rome 2013).

The cult of Athena Nike reminds us of the city of Athens, because on the top of the Acropolis, aside of the Parthenon devoted to Athena Parthenos, there was a smaller temple dedicated to Athena Nike. Thanks to the multimedia equipment in the Tritone Exhibition Space, the sculpture is now visible: through a multi-video system, based on scientific re- searches, it’s possible to see the missing parts as well as the original environment.