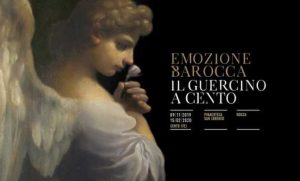 The painting “Diana the huntress” a Guercino masterpiece dated to 1658 will be shown in Cento for its second time, within the exhibition “Emozione barocca. Il Guercino a Cento”, scheduled from 9 November 2019, to 15 February 2020.
The painting belonging to Fondazione Sorgente Group has been already exhibited in the Pinacoteca Civica of Cento in 2011, together with the portrait of the earl Fabio Carandini, who originally commissioned that painting to the artist. The show was organized by the cultural office municipality of Cento, in partnership with the Centro Studi Internazionale “Il Guercino”, and will be developed through the Pinacoteca San Lorenzo and the Rocca of Cento. The event aims to celebrate the most important citizen of Cento so far, including more than 70 paintings to retrace Guercino stylistic path through all his career, from his debut to maturity. This exhibition gives the opportunity to launch new exhibition spaces, restored after the earthquake, which hit Cento and the area nearby in 2012