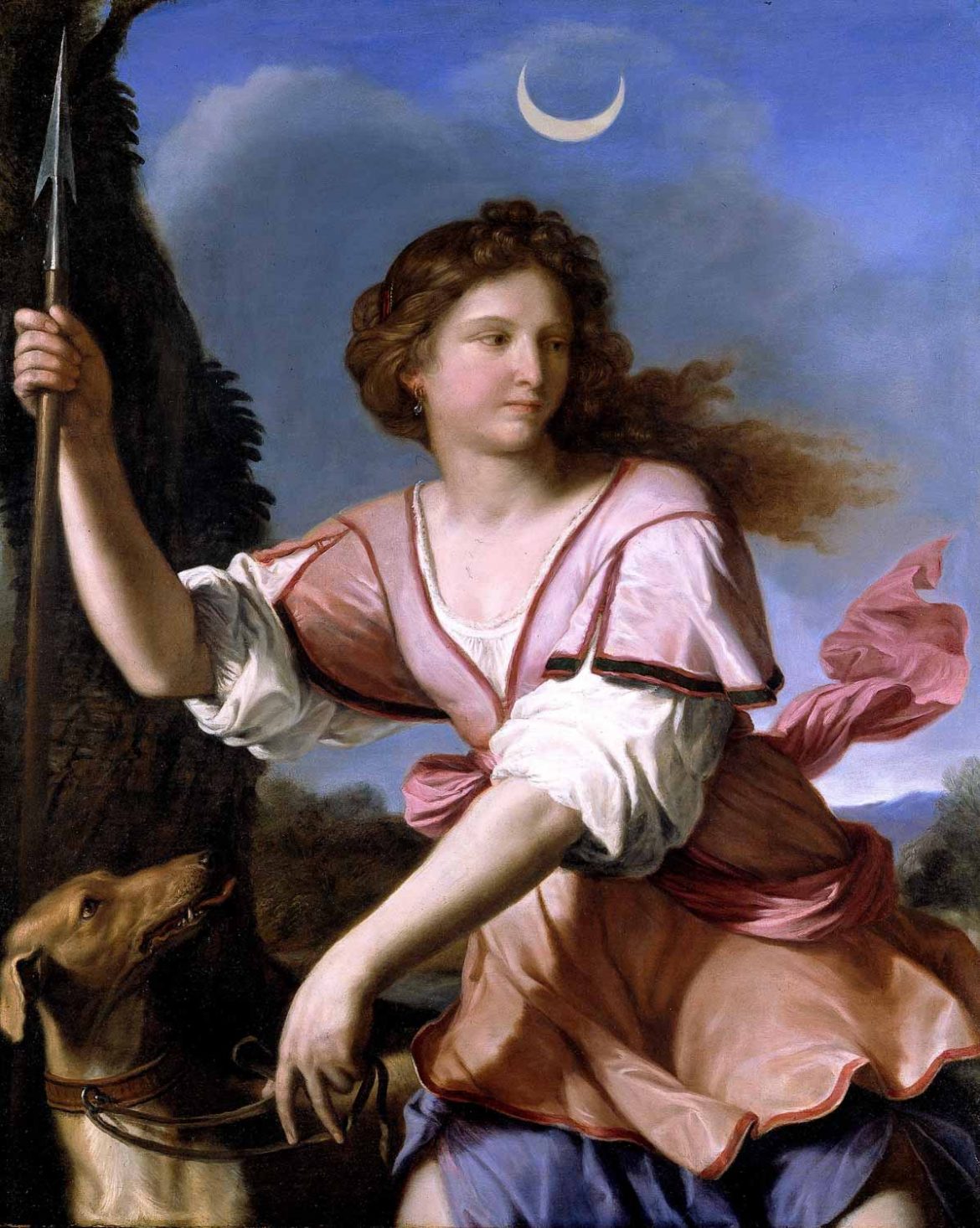 Diana, Roman goddess of the hunt, in this painting appears to be linked with the moon goddess Selene, because of the iconographic attribute of the crescent moon above her head in the sky. In many Roman rites Diana was considered a Trine goddess, a connecting point between the earth and moon, becoming the personification of the Sky.

In her traditional iconography the goddess of the woodlands was usually depicted with a bow and arrow as her hunting instrument, but Guercino painted her in this canvas with a spear: varying the iconography without, however, changing the nature of the huntress. This detail is a clue of the level reached by the artist in that period, allowing him to make this kind of changes. The work was created for Count Fabio Carandini of Rome, as reported in the records of the painter from Cento. His Account Book states on 15 November 1657 an advance payment of 15 scudi for the commission of two half figures. On May 20, 1658, the total payment for the commission was recorded on behalf of Mr. Ridolfi for two canvases, one depicting Diana and one Endymion, which were then sent to Rome to Count Carandini.

The other canvas depicting the sleeping shepherd Endymion has not yet officially resurfaced, but a piece considered until now from the workshop and very similar in size to the original is preserved today in the Vasari Corridor of Palazzo Pitti in Florence, and it’s still under examination by the specialists. This painting belongs to the period of the full maturity of the artist, showing through a great easing on the composition: the base drawing, harmonious and balanced, let suppose a quick but careful coating, while the chromatic contrasts are characterized by soft and pastel tones, perfectly fitting in the late Guercino’ style when he got closer to Reni’s chromatic language.

The portrait of Diana is created in three-quarter view with the head turned compared with the bust imbuing the subject with dynamism, an aspect further accentuated by the rotating motion of the dog, which portrait the most realistic element in the com- position. Guercino immerses the goddess in an ethereal landscape with clear references to the Veneto school, whose depth is determined by the tree trunk that rises behind Diana with the double function of creating a sort of theatrical backdrop in which to place the narration as well as subdividing the work into two spatial planes.

After its appearance from the art market, this painting catalyzed the attention and the curiosity of the scholars and the academic world, and it has been required few times on loan for national and international exhibitions.

It has been exposed in Cento, Guercino’s birthplace, in 2011. Then was required for the Guercino’s monographic show organized in Palazzo Barberini in Rome and then, in 2015 it travelled to Tokyo for an important exhibition dedicated to the baroque master, held in the National Museum of Western Arts of Japan.