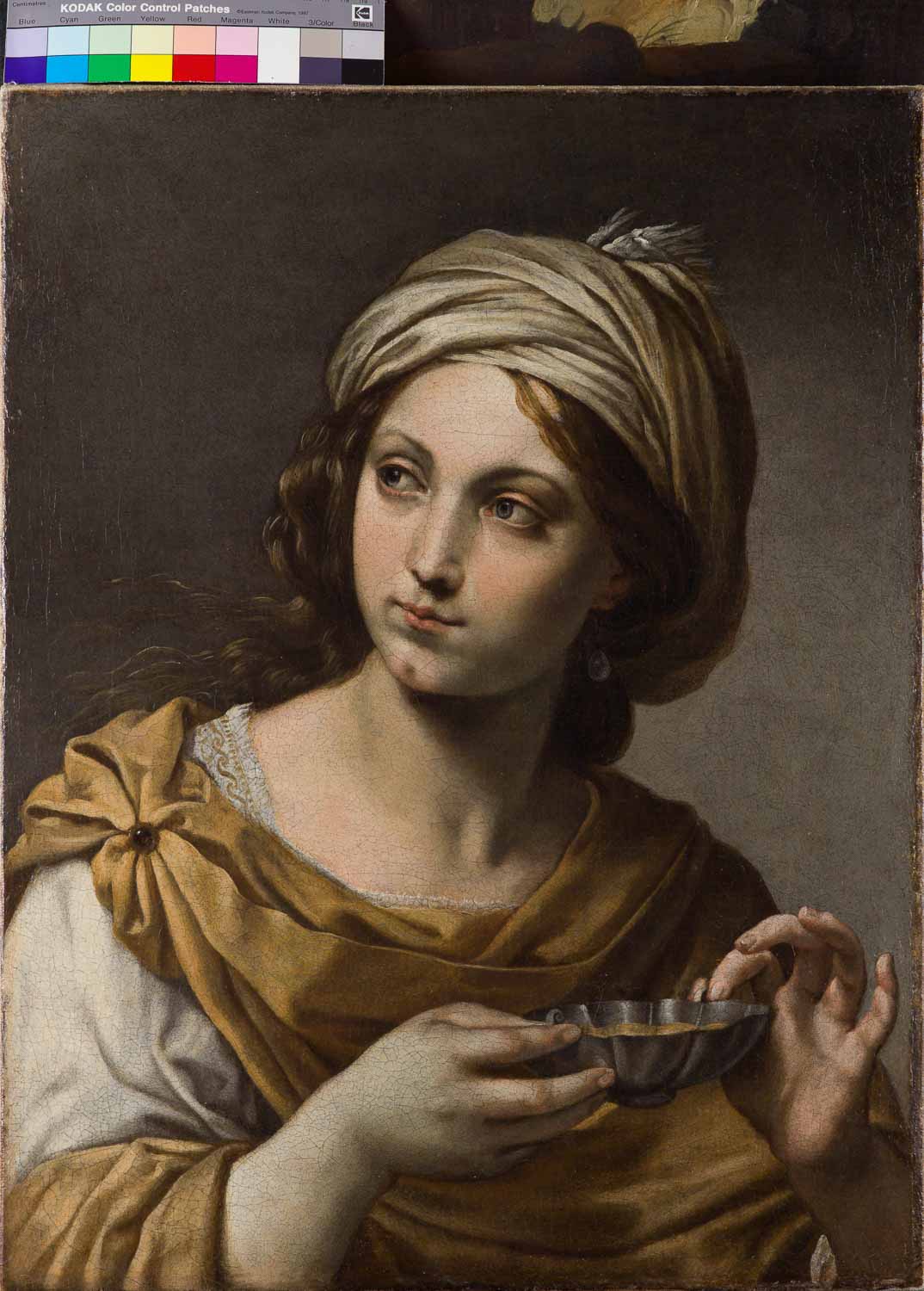 This exquisite portrait in oil on canvas shows the North African queen Sophonisba in the act of drinking the poison that was to bring about her death rather than fall captive to the Roman army, an episode connected with the Punic Wars and greatly emphasized in literature from the 16th century on as an example of moral integrity and consistency. Long hidden from the eyes of the general public, the portrait recently reappeared on the antique market as the work a 17th-century Bolognese painter, a generic attribution due to the thick layer of impurities on the surface that hindered its interpretation. The subsequent cleaning revealed such a degree of pictorial quality that it can now be attributed with certainty to the hand of Simone Cantarini, known as Il Pesarese. Born in 1612, this artist established himself very young in his hometown of Pesaro with important commissions from the wealthiest local families. His renown soon spread beyond these boundaries and took him in 1635, at the age of 23, to Bologna, then the second most important city in the Papal State. It was through the reputation acquired in Pesaro that Cantarini was able to obtain a place there in the prestigious workshop of Guido Reni, with whom he became close friends. The Bolognese biographer Malvasia even describes him as the master’s “favourite pupil” in a period of intense competition between the various members of that small circle. Evidence of the close relationship between them is provided by the fact that the young painter was permitted to paint what then became the most famous portrait of Reni, which now hangs in the city’s Pinacoteca Nazionale. It is precisely the period spent with the great master, which continued until 1639, that must have seen the painting of this Sophonisba. It is in fact a subject addressed also by other pupils in the workshop, like the Flemish painter Michele Desubleo, whose version recently reappeared. The same thing happened with a version by Giovanni Andrea Sirani, which resurfaced in London in 2005. It can thus be deduced, also in view of the limited size of the various versions discovered, that compositions on the subject proved particularly successful and viable at the commercial level. More precise information on this particular composition is found in a collection of inventories of some important Bolognese families of the 17th century and especially of the collector Cesare Locatelli, which shows that no fewer than five versions were known in the 17th century (Collezioni e quadrerie nella Bologna del Seicento. Inventari dal 1640 al 1707, ed. Anna Cera Sones and Raffaella Morselli, Bologna, 1998, p. 277). The subject is given in these lists as “Circe” or “Woman in Eastern Dress with a Shell” and it is stated that two of the five were autograph works of Simone Cantarini, one currently in the City Art Gallery of Bristol, UK, and the other in a private collection in Pesaro. The latter it is the painting now owned by the Fondazione Sorgente Group. Further confirmation of the importance attached to this subject in the Locatelli collection is provided by the presence of a third version, described as the work of Cesare Gennari, a pupil of Guercino, and differing from the others only in some stylistic variations regarding the clothing and turban.

These female portraits remained in the collection until 1693, after which they were sold. The indications in the margin of an engraving by the Lombard artist Giacomo Gallinari (active in Bologna in the late 17th and early 18th century), a faithful reproduction of our painting described as “after Cantarini”, make it highly likely that one of the versions of Sophonisba was bought for the collection of Count Paolo Zani in Bologna.

The restoration mentioned above proved crucial for the purposes of attribution. Removal of the thick patina formed over the years through oxidation revealed a use of lighter, pearly colours definitely more akin to the soft, pastel-like hues characteristic of Reni’s work in the 1630s, an unmistakable hallmark of his painting and one that he required his pupils to adopt as well.