Saint Cecilia with a Portable Organ, Another Saint and a Putto 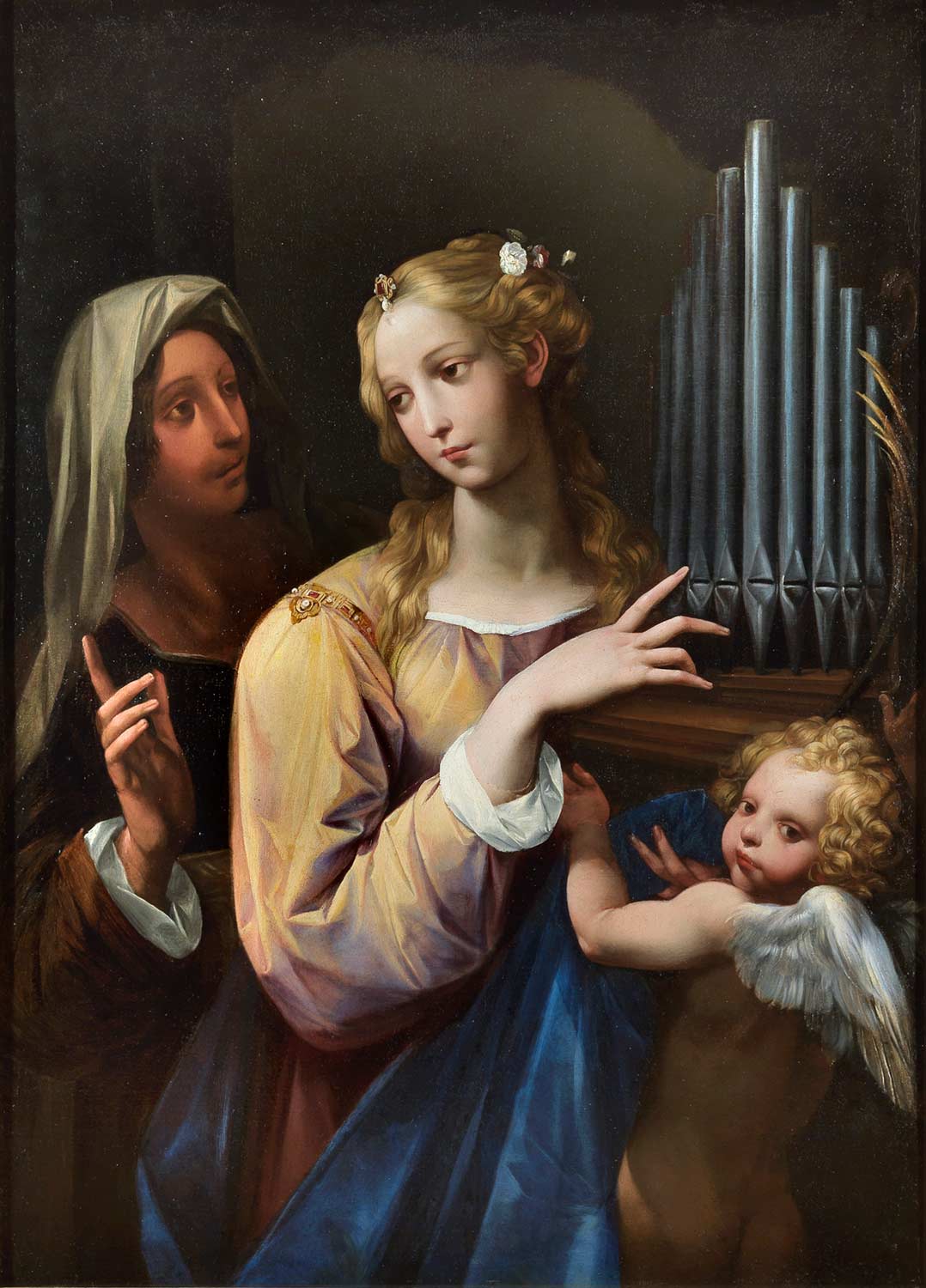 Saint Cecilia with a Portable Organ, Another Saint and a Putto
Oil on canvas
136 x 98.5 cm

Martyred in Rome in the 2nd century under Emperor Marcus Aurelius (161-180 AD), Cecilia was buried in the San Callisto catacombs. In 821 her remains were moved to a Church erected for her worship in Trastevere on the orders of Pope Pasquale I, where they are still conserved and venerated today. The Saint depicted here, dressed in a yellow tunic and blue cloak, turns toward an unidentified woman next to her. Herwarth Röttgen, the most important expert of this artist, hypothesized that the other women could be Agnes or Agatha, who are mentioned together with Cecilia in the Canon of the Mass. Also taking part in the scene is a small, winged putto that appears to turn directly toward viewers, helping them share in the moment.

Röttgen dated the painting from around 1630 and it is comparable to the “Maria Salomè” in the church of the same name in Veroli. The German scholar described the “Salomè” as one of the Cavalier d’Arpino’s works of “frigid rigor”, a description well suited to this St. Cecilia as well: “an extremely calm yet effective chromatic balance […], the grey-azure and yellow gold spread on the smooth surfaces of the trimmed garments and the well-defined folds, encourage the eye to linger in in- finite peaceful contemplation” (H. Röttgen, Il Cavalier Giuseppe Cesari d’Arpino. Un grande pittore nello splendore della fama e nell’incoscienza della fortuna [The Cavalier Giuseppe Cesari d’Arpino. A great painter in the splendor of fame and recklessness of fortune], Rome 2002, fig. 231, pp. 455).

Its excellent state of preservation enables a full appreciation of the delicacy of the tonal passages, particularly in the clothes of the saint, which are finished with synthetic laky glazing on the bright yellow. And perhaps the painter’s adhesion, in his late period, to the ideological dictates and decisive forms of the Council of Trento explain the tenderness and expression of the Saint, whose extremely long-fingered hand seems to search for the keys of the organ while her gaze awaits divine inspiration. An image akin, as Röttgen confirms, to the most ancient and primordial Christianism.