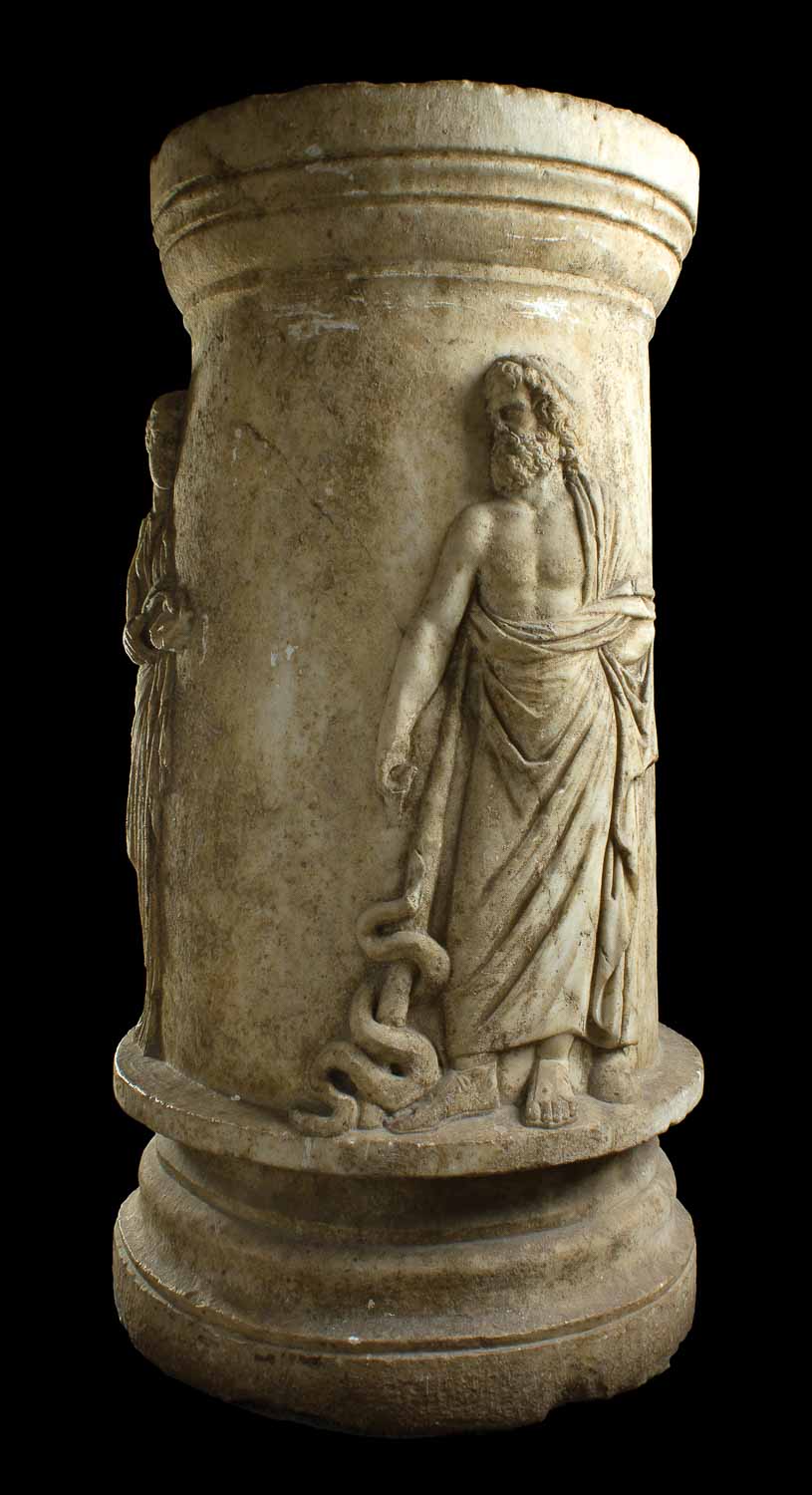 Great votive monument in white marble with a wide cylindrical frame and simple moulding.The high stylistic quality relief is in good state of preservation and boasts a clear plasticity of the shapes, especially visible in the divine characters.

In fact, the divine triad is carved on the surface: Asclepius, Igea and Telesphorus. The first one, god of the medicine, healing and snakes, is standing, covered by his cloak, and is leaning on a stick by the hollow of the arm; the holy snake is coiling around that stick. The omphalos of Apollo appears next to Asclepius’ left foot. His daughter Hygeia is carved on his right, soon after a smooth surface: her hair is combed and she wears a chiton and a cloak. The holy snake coils on her right arm. The image of Telesphorus completes the depiction: traditionally identified as the son of the god, he is standing and completely covered by an woolen cloak with hood, called paenula cuccullata. He supported the father on his medical activities. The pad-cloth of Asclepius encloses the head to recreate the classical hairstyle of Greek divinities. The mouth is closed by fleshy lips and thick mustache, the gaze appears firm and determined, turned to the right towards his daughter Hygeia, who’s guardian of the health, as well as assistant and follower of the medical art, The three carved characters evoke the famous iconography of the three divinities, visible in Greek statuary and then duplicated in so many exemplars of the Roman Imperial age. Therefore, the image of Asclepius reveals a structure that leads to the sculpture type of the Asclepius “Giustini”, on his essential traits. It reminds an Attic original sculpture, dated at the beginning of the IV century BC and then copied in so many different Roman exemplars, which are came to us. Specifically, there are important similarities with the statue found in Tivoli and today is preserved in Vatican Museums. Although the surface presents a scarcely eroded patina, the face of the god appears wise and presents many details, while hair and mustache are thick, with bushy locks, ending with characteristic curl lock. Regarding the gestures and features of Hygeia, the female divinity recalls the sculpture type Broadlands-Conservatori, as we can see by many Roman copies derived from a Greek original statue from IV-III century BC. The goddess has the hair combed on a krobylos behind the nape, she wears a chiton and a cloak, hanging down the shoulder, covering the elbow. It leans down the left forearm, falling outwards with a clear plasticity in many thickly fluted folds. This one recall to the mind different exemplars of Trajan and Antonina age. The arms are stretched out, making a libation while the holy snake wraps them in its coils, following the traditional iconography. She keeps the patera in the left hand, sloped to offer nourishment to the snake, whose muzzle is today lost.

Telesphorus is the third character completing the altar: he is standing with bare feet close each other, he is completely covered by a heavy woolen cloak with hood, called paenula cuccullata, typical of the iconography of this young god. However, the connection of Telesphorus with the di- vine couple Asclepius and Hygeia is latter, as well as his strong presence in the iconography: in fact only Pausania wrote about the official introduction of Telesphorus in the sanctuary of Asklepios in Pergamon and his importance. This is proved by coins and inscriptions, dated from 98 and 102 AD and also by the construction of the Telesphoreion inside the Asklepieion in Pergamon. Many coin and iconographic proofs provide documentary evidence about a further increase of the cult of the young divine boy during the empire of Adrian, Septimius Severus and Caracalla, while he continues to be represented also in votive relieves together with Asclepius and Igea in Thrace and in Asia Minor. His name means “the one who leads to a full development”, “who brings to completion”, “making the fruits ripened”, propitious not just for healing but also for the births. The first marble sculpture depicting Telesphorus is identified in a statue from the Hadrian age, preserved in the Munich Museum: it presents many similarities with our Altar relief with Asclepius.

This artifact can be dated around 2nd century AD and, according to Daniela Bonanome (in “Altare votivo ad Asclepio, Igea e Telesforo”, in Lazio e Sabina 9, 2012, p. 246- 252), more precisely, in the Antonine age, around 160 AD. It was probably realized by a private citizen after a terrible plague, burst within the legions deployed on the Parthian front (165-166 AD). It was known as the “Antonine pestilence”, and quickly spread across the entire Empire. There were a lot of human losses, also including the emperor Lucius Verus in 169 AD and Marcus Aurelius in 180 AD. According to Daniela Bonanome, the altar of the divine triad, may be a tangible proof of how deep was the fear of the epidemic disease. but in the same time it reveals the modality of seeking the divine protection. The altar of Asclepius presents an interesting history about his own study and preservation. In fact, it was published for the first time by Dräger in 1994 on his collection of studies about altars and Roman basis in the religious sphere, as we can see observing some photographs, preserved in the Archive of the Germanic Archeological Institute, mainly taken in 1982; as part of the collection of ar- chaeological museum of Grottaferrata and dated on the 1st century BC by the German scholar (Dräger, O., Religionem Significare. Studien zu reich verzierten römischen Altären und Basen aus Marmor, Mainz a. Rh. 1994, p. 194, n. 15). Then the altar was published inside a collection of masterpieces, coming from the Saint Nilo’s Abbey, in Grottaferrata in 2008 with a report by Daniela Bonanome, where the artwork resulted lost or “probably in a private collection”. It is very interesting to note that the side of the altar with the figure of Telesphorus wasn’t known so far, simply for a lack of photos. Scholars could only sup- posed its presence, considering an extra space on the surface, containing another relief. Only in 2012, on the occasion of the publication of the conference proceedings about the Nono incontro di Studi sul Lazio e la Sabina (Ninth meeting of Studies about Lazio and Sabina), Bonanome has presented her entire study supported by evidence, due to the discovery of the altar in the Belisari private collection. The scholar could make a deep iconographic analysis, especially regarding the figure of Telesphorus, dating it more precisely. The altar of Asclepius was subjected to protection by the Superintendence for Archaeological Heritage of Lazio with the 26/02/2013 D.D.R. and then bought in 2016 by Fondazione Sorgente Group, where is permanently exhibited inside the Tritone Exhibition Space, for the public fruition.