Trapezophoros in the form of Leda and the swan 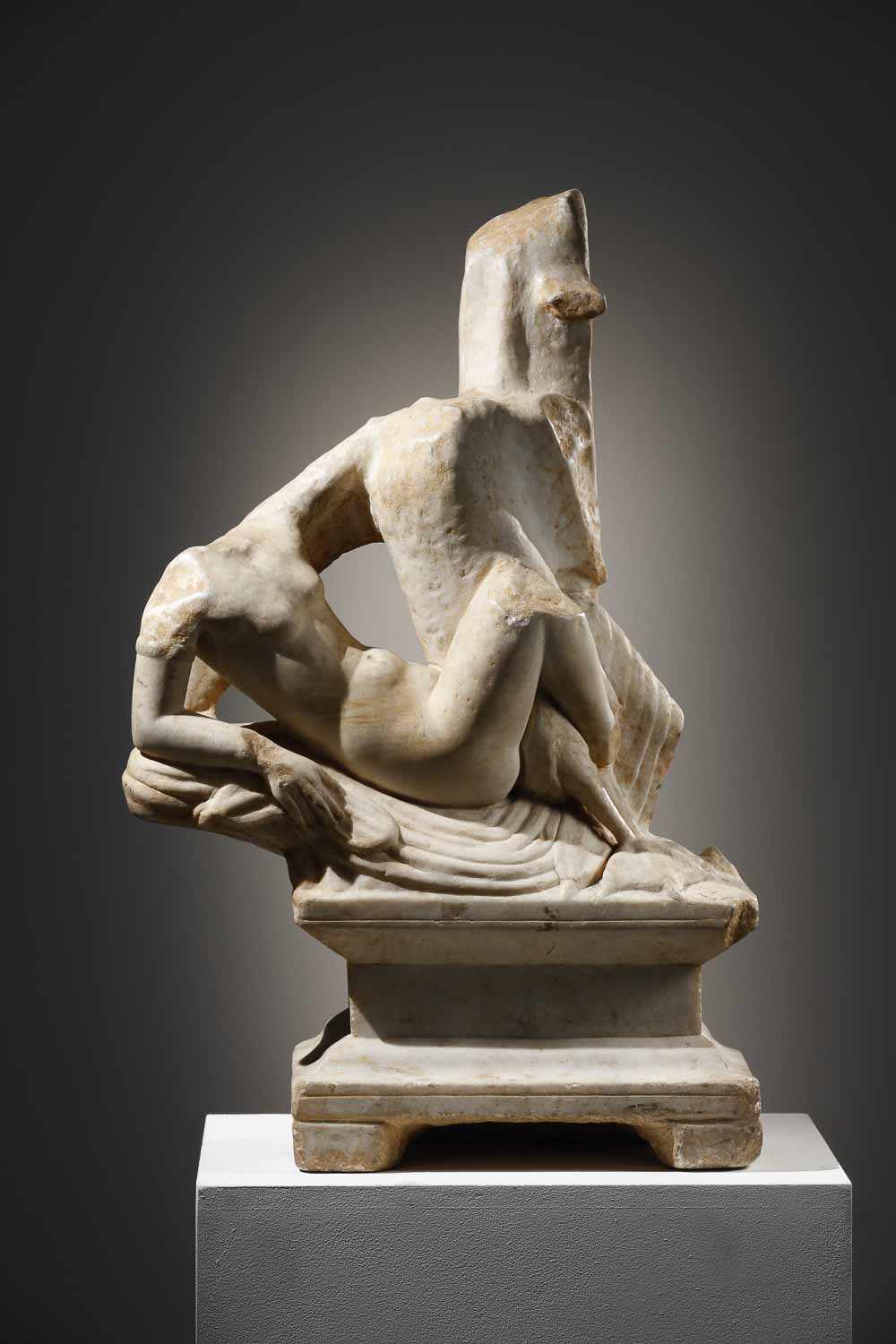 Trapezophoros in the form of Leda and the swan
White marble
h. 76.3 cm
1st-2nd century AD

Illustrative trapezophoros in marble, representing the amorous embrace between Leda and the Swan, that is. Zeus, who fell in love with the girl and transformed into the noble bird to pursue his goal. It’s a furniture element, a trapezophoros used as a single support for a shelf, probably leaning against a wall, as the sculpture has a rectangular frontal base. On the right side, the naked girl lays on a drapery with soft folds, the elbow leaning and the right arm flexed are sustaining her while she holds the fabric tightly; the left arm is raised, sensually embracing the swan’s body and her legs are even intertwined with the animal’s paws. The drapery then seems lifted and wrapping around the left leg of the woman, which is flexed and elevated. The swan is held up by its own paws, pushing its body against the smooth skin of Leda. The right wing of the swan replies to Leda’s embrace, meanwhile the left one, partially preserved, was probably stretched. Head and neck are today missing but presumably the swan bowed its neck to rest the head on the girl’s chest to kiss her lips. The head and feet of Leda are also missing. Behind the figures in the background, there is a column with a quadrangular section but the whole sculpture is sustained by a four-feet rectangular plinth.

During the 2nd century BC few luxury diner table started to be seen in Rome as war booty of the victorious Eastern campaigns, together with other Hellenistic art crafts. During the first empire the request on the market for these objects was increasing, as deluxe decorating objects. For that reason, many workshops specialized in decorative sculpture were opened. These workshops maintained an artisanal dimension and many of them produced high quality items matching the requests of highly exigent clients. There we also many requests for art objects related to the Greek mythology, but they were produced as pure esthetic objects, losing their etiologic peculiarities.

This is probably the case of our trapezophoros and considering the complex composition of the two figures between, it can be dated between the end of 1st and beginning of the 2nd century AD.