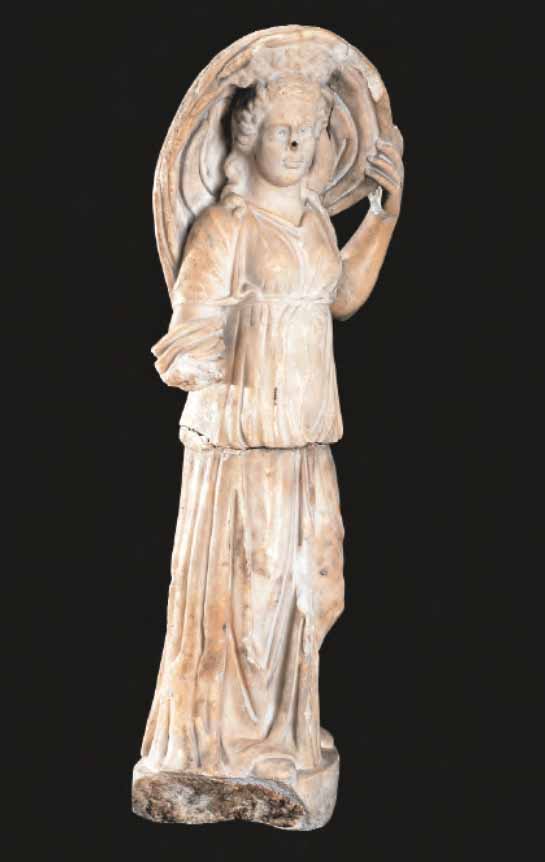 The sculpture, formerly the property of the Count of Montevecchio and kept in the Palace in Fano from the 18th century, was carved from a cylinder of coarse-grained marble, probably Proconnesian, that shows no traces of reworking; it is missing the right hand that perhaps held a torch, while the inscription on the base is most likely from modern times.

The figure wears a chiton with short sleeves under a long peplos attached to the shoulders and a double belt around her waist. A loose cloak, supported by her right arm and held by the left hand, passes behind her back and floats up around her head. From her shoulders the lunar crescent is clearly visible, identifying the sculpture as a personification of Selene, the moon goddess and wife of Zeus. The goddess, wearing a traditional hairstyle, her locks gathered and pinned high behind her head with numerous ringlets, has an oval face and simple features, extreme proportions and long and narrow eyes. Her left hand and arm are disproportionate, excessively shaped by the principal perspective that would have been from the right in the direction of the goddess’gaze. The figure depicts the personification of Selene as she descends to earth with her cart to meet Endymion, thus explaining the cloak that halos her head. The iconography of the goddess is found on Roman sarcophaguses, whose fronts depict the myth of Endymion in relief, and was extremely widespread starting from the first half of the 3rd century AD (of which we have numerous examples in the Musei Capitolini, the Borghese Palace in via Labicana, the Vatican Museums and The Metropolitan Museum of Art). A considerable resemblance to our present relief sculpture is found in a sarcophagus dating from 230 AD preserved in the Doria Pamphilj Gallery.

Interestingly, the statue decorated a sanctuary, perhaps in a home, used in oriental the religions which were quite popular in Rome during the second half of the 3rd century AD. Furthermore, it should be noted that the iconography of Selene with the moon behind her also appears in the reliefs of Mithraism, which appeared in Rome around the 1st century BC and spread extensively between the 2nd and 3rd centuries AD.