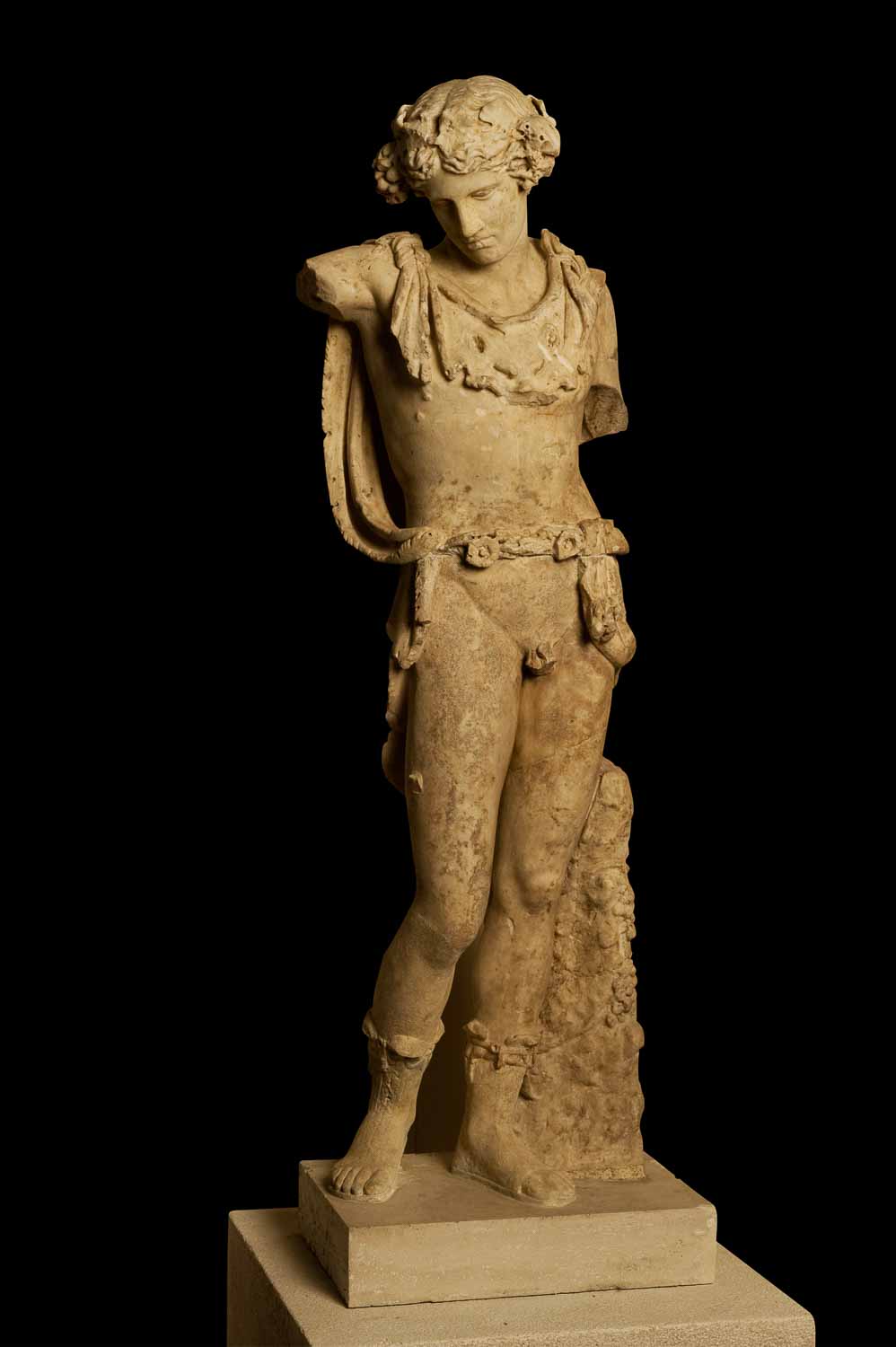 In July 2009, it underwent cleaning prior to being displayed at the National Museum of Rome in Palazzo Altemps in occasion of the exhibition promoted by the Fondazione entitled “The Smile of Dionysus”. The god’s delicate body is completely nude apart from a párdalis (leopard skin) that serves as a cloak and completely covers his back ending in a long tail, while in front a protome attached to his shoulders falls over his chest, and he wears high ankle boots on his feet. His thick head of hair with long wavy locks is adorned with a luxurious plant diadem including ivy, vine-leaf and grape leaves. An interesting detail is the garland of tiny five-petalled roses that wraps around his abdomen and conceals an ancient horizontal cut. The rose is a symbolic reference to the springtime rebirth of vegetation and spiritual harmony in association with the worship of both Aphrodite and Isis. It is the symbolic flower of the celebration of the dead, called the Rosalia, which was held during the month of May and accompanied by a celebration for Liber, the god that guarantees a happy afterlife.

The sculpture successfully combines the iconographic scheme of the young athlete in the so-called Westmacott Ephebe type, attributed to Polykleitos (mid 5th century BC) with the image of Dionysus in the so-called Thriambos (Triumph), mythical winner of the fight against the Giants or the Indians thanks to his leather ankle boots and leopard skin fastened to his back. A considerable resemblance can be noted to the depiction of the god in Pompeian frescos, in which Dionysus sweetly and curiously approaches the sleeping Ariadne, abandoned by Thesius on the island of Naxos. The statue, most likely created in a Roman workshop during the epoch of Emperor Marcus Aurelius (161- 180 AD), probably decorated the garden or peristyle of a rich domus, where, with a special figurative display, it was used to create a Dionysian atmosphere that evoked the presence of the god and his followers, symbolizing the full enjoyment of the pleasures of life.