Statue of a togatus with bulla 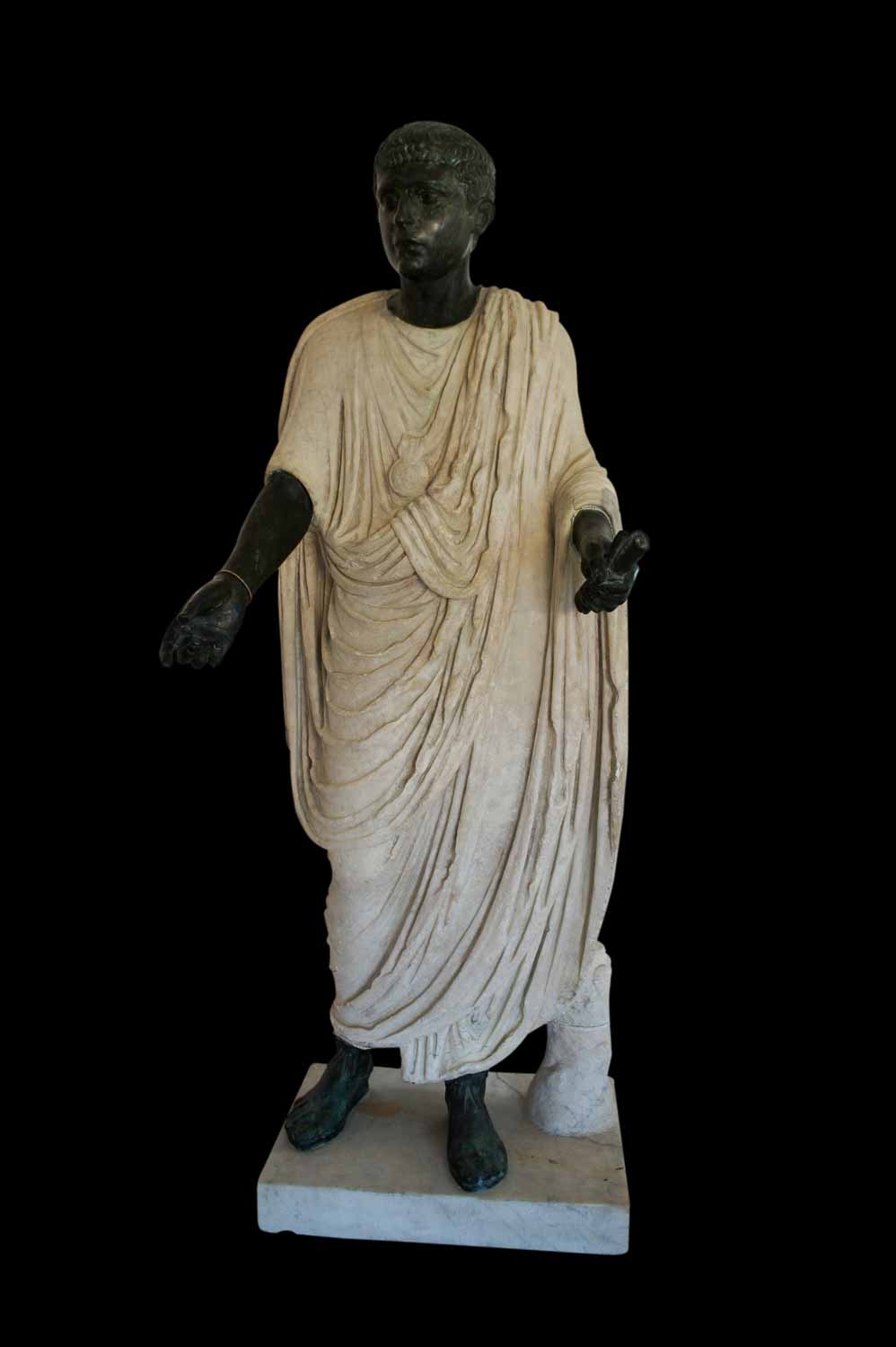 Statue of a togatus with bulla
Luni marble
h. 160 cm
Half of the 1st century AD

Intact marble statue depicting a young man who is dressed in a toga praetexta and wears a bulla around his neck. In frontal position, he stands on his left leg while the right leg is slightly bent and pushed sideways towards the back. Head, hands and feet are 19th century restorations. In origin, the sculpture must have been placed within a niche or beside a wall, since the rear appears to be only roughed out and is devoid of detailed carving, as customary for parts that were not meant to be visible.

Toga praetexta was the garment, distinguished by a Tyrian purple stripe, worn by high-ranking magistrates, by priests and by freeborn men until 17 years of age, before being dressed in the toga virilis and, thus, taking on the duties of a civis Romanus. The man’s young age is confirmed by the bulla worn around his neck. Infants were made to wear the bulla nine days after their birth (lustratio), and it was an ornament reserved only for male freeborn children, as borrowed from the Etruscan tradition. It was composed of two semi-spherical valves held together and it carried inside an amulet to protect the boy against acts of witchcraft. On the 17th of March, in honour of Liber Pater – the Italic god of fertility and of wine, generally identified with the Greek Dionysos – the Liberalia were celebrated with festivals and processions, during which the rite of pas- sage to manhood took place. The young men dismissed the bulla and the toga praetexta in favour of the toga virilis.

The dimensions of the sculpture and the physical structure are very reminiscent of a teen-ager about to enter manhood. Diagonal folds go up from the ankles to the left arm, which is stretched forward with the hand originally holding a scroll. The soft lacinia emerges with its loose folds, while the sinus falls just above the knee and is draped in shallow, parallel, slack folds. The balteus, not bulky, is faintly underlined by folds, and from it a soft umbo comes out and is subsequently arranged over the abdomen (Rupprecht Goette, H., Studien zu romischen Togadarstellungen, Mainz am Rhein 1990).

The stylistic features and the handling of the garment, characterized by a soft and loose drapery with neatly arranged folds, allow us to chronologically set this statue in the middle of the I century AD.