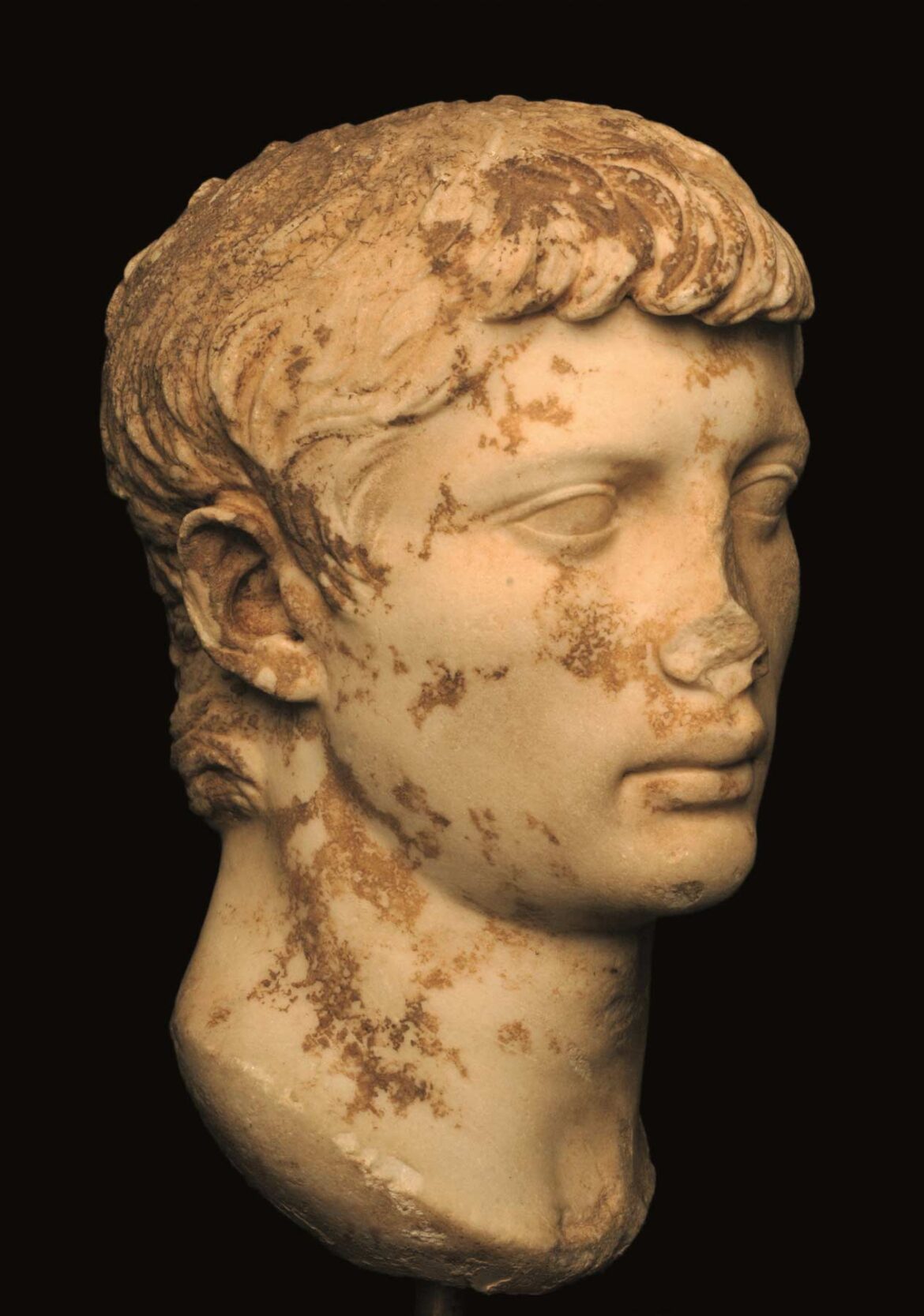 The head, slightly larger than life size, depicts a youth of twenty years distinguished by a slightly protruding upper lip and hair brushed to the side and parted with a double helix on the nape of his neck. His gaze is veiled by an intense expression of sweet melancholy. The head was probably connected to an honorary statue of a little over two metres tall. Antonio Giuliano recognized his face as a portrait of Marcus Claudius Marcellus (42-23 BC), son of Octavia, the sister of Augustus, and Gaius Claudius Marcellus, a descendant of the age-old Claudius family. At only thirteen years of age Marcellus was present at the triumph at the battle of Actium (29 BC) and later took part in the victory over the Cantabri (27 BC). Augustus, with no sons of his own, adopted his young, cherished nephew designating him as his heir and married him to his daughter Giulia. The youth was then nominated as an aedile (23 BC), organizing magnificent games for the Roman people, and then as a pontiff, accelerating his cursus honorum for appointment as the next emperor, as was the desire of Augustus. That same year Marcellus suddenly fell ill and died in Baia, according to some accounts the victim of a conspiracy in the palace plotted by Livia, the second wife of Augustus, in an effort to favour her son Tiberius as his successor. Augustus was deeply grieved by the death of his nephew, in whom he had placed great hopes of a certain successor to his imperial power. He buried him in his own Mausoleum in the Campo Marzio in 11 BC, dedicated the theatre by the Tiber to him and encouraged his veneration throughout all the cities of the Empire by erecting numerous honorary statues (some in gold) as evident in the dedications that have been discovered. The feeling of painful grief following the premature and unexpected death of the youth was later committed to memory in the verses of Virgil (Aeneid, VI, 868 ff.), in which Octavia literally faints from the shock of the memory.

Until the present day, no certain iconography had been identified in the face of Marcellus and he was recognized only thanks to the research Antonio Giuliano completed for the book by Valerio M. Manfredi, Marcello, Rome 2008, published by the Fondazione itself. His identity was confirmed by an iconographic comparison with two other portraits, examined side by side for the first time during a museum installation in the Augustus Room at the National Museum of Rome in Palazzo Massimo, which was supported by the Sorgente Group Foundation. Marcellus is now recognized in a portrait preserved in the Musei Capitolini, which was at one time thought to depict Brutus the Younger, Caesar’s murderer. His identity was confirmed based on a comparison with a portrait found in Pompeii in the so- called House of the Cithara Player, which today is preserved in the National Archaeological Museum in Naples: the facial similarities are evident, con- firmed by the presence on both heads of the double helix dividing his hair on the nape of the neck, like in our work of art. It should also be noted that the young prince became the patron of the city: in fact, in the so-called Triangular Forum in Pompeii a base was discovered with a dedication to M. Claudius M. f. Marcellus / patron. The portrait of Marcellus, as considered by Giuliano, is among the most important masterpieces of the early Augustan age and evidence of the great proficiency of sculptors in harmoniously blending the canons of late Republican portraiture with those of classicism. The face thus displays the unique features of the youth subdued by the composure of Athenian tradition and enriched with the sentimental emphasis on colour of the Hellenistic assimilation. The sculptor appears thus to have been touched by the unhappy fate of the young prince, esteemed by Augustus and destined for glory, whose life was ended unexpectedly.