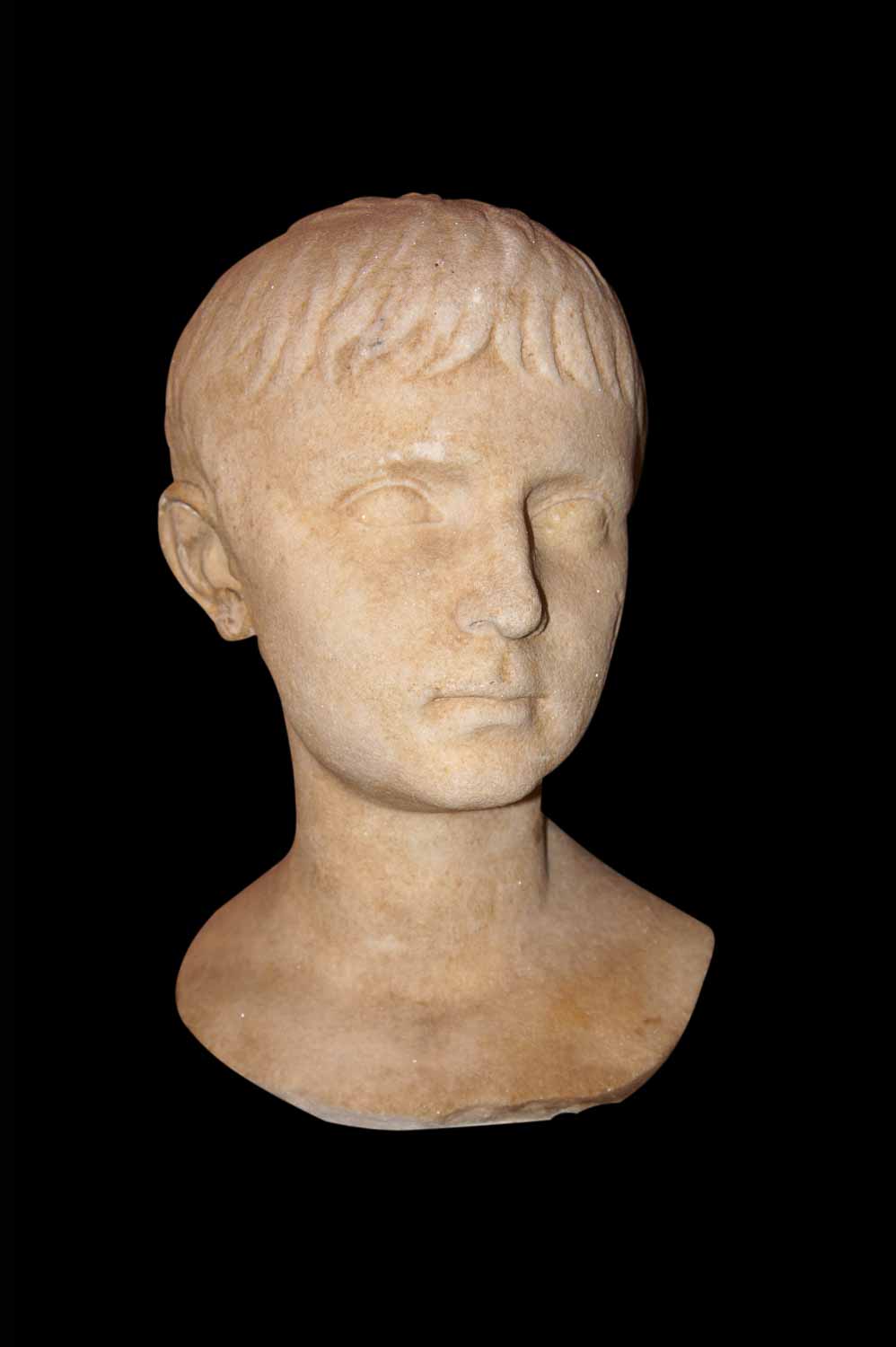 Parian marble
h.34 cm
End of the 1st century BC

The sculpture is carved in a fine grain of Parian marble, it is fully preserved, and it boasts a superb workmanship, with elegant and neat carving that carefully reproduces the characteristic physiognomic features. The surface is in good state of preservation and it shows a scarcely eroded patina, probably the consequence of a previous exposure to the open air, with minor chippings.

The young boy depicted, belonging for his physiognomic characteristics to the Julio-Claudian family, was erroneously identified with Gaius Caesar. A de- tailed analysis and a comparative study with other statues have in fact shown that we can recognize in this head the features of the other appointed prince, Lucius Caesar. Typical is the shape of the head with the hair arranged in soft locks which from the central whorl are brushed forward over the forehead, forming the characteristic fork in the middle, as it can be observed on other exemplars; another typical feature, visible on the portraits of both princes as well as on Marcellus’, is the arrangement of the locks above the nape of the neck which are again brushed forward and down behind the ears. The eyes have thin lids and are quite narrowed, shadowed by the eye- brows; the lips are closed and thin, with minor fleshiness at the corners.

The head depicts a boy of roughly ten years of age and, therefore, it belongs to Type I of Pollini’s classification (in “The Portraiture of Gaius and Lucius Caesar”, New York 1987), just like the portrait of Gaius; it can be chronologically set in the last years of the I century BC. Possible comparisons can be made with a sculpture found in 1933 in Philippi and with the one housed in the Cincinnati Art Museum, yet more interesting resemblances are to be found in the head of Lucius in the Archaeological Museum of Aquileia, belonging to Type II and depicting a boy of circa fourteen years of age. As on the latter, also on the portrait of the Fondazione some features that will become characteristic of subsequent portraits are here already foreshadowed.

The chronological frame is confirmed by Megow (in “Kameen van Augustus bis Alexander Severus”, Berlin 1987, p. 214-215), who dates the exemplar in analysis to 10 BC. Once again, an important reference of study is the group realized in Corinth at the beginning of the I century AD, which shows Gaius and Lucius, almost twenty years old, standing next to the celebrated grandfather. The physiognomic characteristics of the face of Lucius excel in the comparison with the one of Gaius: features more extended, thin nose, not so distant eyes, thin lips with minor fleshiness at the corners and a different arrangement of the locks forward over the forehead. Although so many different doubts, the presence of both princes was furthermore researched along the frieze of the Ara Pacis: in fact, at this point, is unanimous the identification of the little Lucius on the north side near his mother Julia the Major, who opens the parade of the imperial characters, in the same line of Agrippa and Gaius and according with the procession of the south side.

Important is one more time the comparison’ study between the different portraits of the brothers, developed by J. Pollini: it identifies the ones’ from the others’, dividing them in two types of different age. This sculpture has been object of scholars’ study from 1870 and now finally cleared with the certain attribution of the face of Lucius Caesar (in “Augustus”, Milan 2013, p. 175), as one of the best portraits of the young prince ever known.