Portrait of deified Antonia the Younger 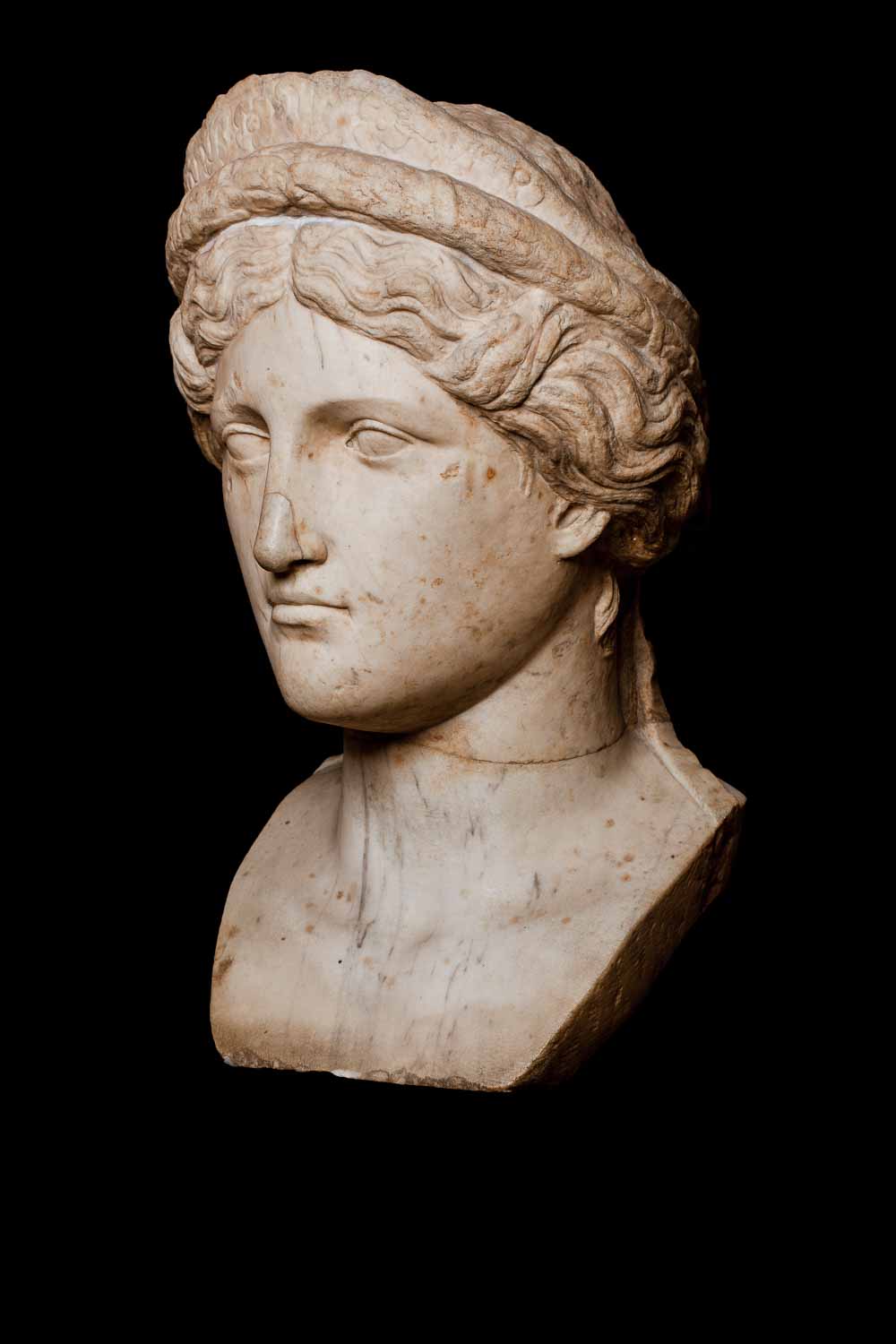 Portrait head carved in marble of larger than life-size proportions, depicting a young, deified woman, which can be identified with Antonia the Younger, and datable to the second half of the I century AD. The face is intact, while parts of the neck and the bust are restored; the surface is polished. The soft hair is held together by a laurel pad topped by a crown (the stephané) decorated in relief with an alternating pattern of rosettes and lotus buds.

Albeit idealized, the physiognomic characteristics and some specific comparisons enable to recognize in the sculpture the deified features of Antonia the Younger, daughter of Marcus Aurelius and Octavia, the sister of the emperor Augustus. Antonia was born in 36 BC and in 17 BC she married Drusus the Elder, brother of the future emperor Tiberius, from whom she bore: Germanicus, adopted and appointed heir to the empire after Tiberius yet died prematurely; Claudius, future emperor in 41 AD, and Claudia Livilla. At the death of Tiberius in 37 AD, succeeded her grandson Caligula, son of Germanicus. During Caligula’s reign, Antonia the Younger died in 38 AD at 74 years of age. Suetonius claims that she died of an illness caused by the emperor’s mean behavior, even though the writer reports some rumours according to which Antonia had been poisoned by her grandson. According to Cassius Dio, Caligula compelled her to commit suicide because she used to rebuke him. In the Julio-Claudian period, the diadem was added to the portraits of the women belonging to the imperial house (Livia and Antonia the Younger) as a sign of their deification.

There is a striking resemblance be- tween our sculpture and the Ludovisi Head housed in Palazzo Altemps in Rome, which is now acknowledged as a portrait of the same Antonia the Younger. When Claudius became emperor, he honoured the memory of his mother by promoting colossal cult statues bearing her features. Again, regarding resemblance, it is important to note the likeliness with Antonia’s portrait in the centre of the southern Ara Pacis frieze, where she wears a laurel wreath over her head and she is turned backwards to her husband Drusus the Elder, while holding the infant Germanicus by the hand: many of the physiognomic features visible here also recur on our portrait-head.

A great deal of interest lies in the collectionistic history of our sculpture, which from 1860 to the beginning of the 20th century was part of the Chapman Collection in Philadelphia and, between 1860 and 1920, was also exhibited in the Philadelphia Academy of Art. Here it became an unaware protagonist in the iconographic renewal underwent by American coinage. In fact, Theodore Roosevelt promoted the production of a new coin series, urging engravers to turn onto antique images for a coinage that would be “worthy of the ancients”. According to C. Vermule (in Numismatic Art in America, 1971, p. 63 fig. 72), while on exhibit in the Philadelphia Academy of Art, our female head served as one of the models employed in 1881 by the master coin maker Charles E. Barber for the genesis of the image of Liberty with wreath and diadem, stamped on 1 to 5 cents coins. Engravers are said to have admired the ancient sculptures in the Philadelphia Academy of Art and to have hence drawn their inspiration for the creation of coining dies. Thus, the coinage issued between 1883 and 1913, featuring the reproduction of our sculpture, is known as “the Liberty Nickel”: on the recto we find the profile of a female figure with many physiognomic resemblances with our portrait. The verso is stamped with a large Roman numeral V (five, cents) set within a crown.

In conclusion our sculpture, now acknowledged as an imperial deified portrait of Antonia the Younger dated to the second half of the I century, has been made famous by the American currency production that depicted it as the personification of Liberty.