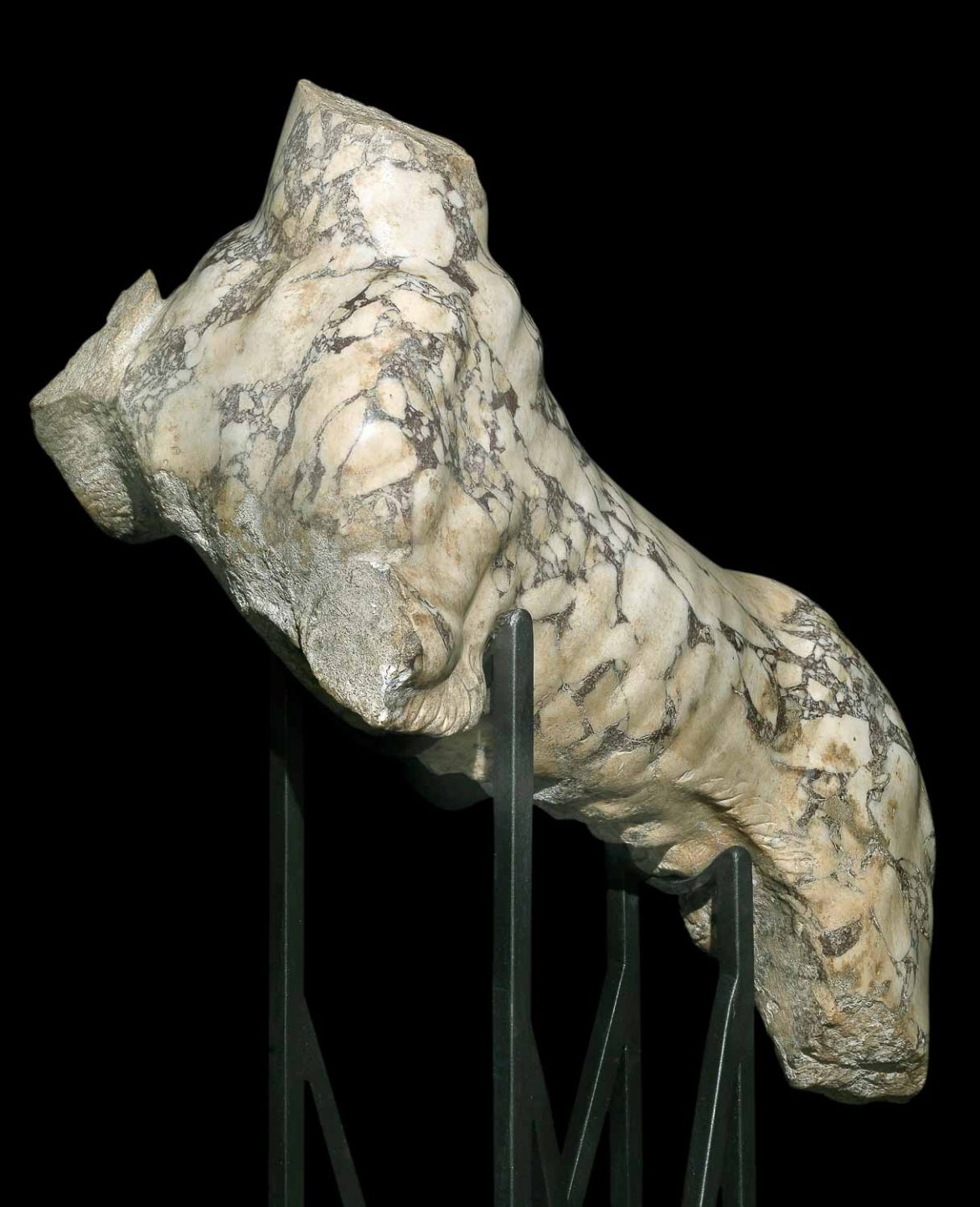 Fragment of a feline statue, with head, fore and hind legs broken away, whose slender body resembles that of a panther; noteworthy is the extraordinary handling not only of the anatomical features of the skinny and supple body, from which the ribs show, but also of the dynamic tension in the limbs; remarkable is the presence of the sculptured breast. On the animal reconstruction, the feline must have rested on its hind legs and must have been leaning forward, with its fore legs outstretched and its head bent rightward. The general movement can be restored by means of the comparison with some sarcophagi bearing scenes of Dionysiac trains, where are displayed felines with breast, similar to our exemplar, that accompany Dionysos and his thiasos the God’s triumphal chariot. Another close comparison is represented by the several marble opus sectile panels again portraying Dionysiac scenes, such as the example found in the Basilica of Junius Bassus and housed in the Capitoline Museums, where a tiger with breast assaults a veal. It is interesting to see how the identification of the exact feline species was carried out: in the opus sectile panels the felids are clearly depicted as tigers with breast, since the use of polychrome marbles allowed mimetic rendering of the striped fur. It is important to stress that in carving our exemplar the Phrygian marble had been selected, probably because this stone could in some way resemble the coloured stripes of the feline fur.

It is the tiger to be generally represented with breast and it is found in many scenes, in a rampant position, to protect her cubs. The Greeks got to know the tigers thanks to the expeditions of Alexander the Great. In addition, after the emperor Augustus brought the first tiger to Rome for the inauguration of the Theatre of Marcellus in 11 BC, this feline became the most requested beast for arena fights, and the numerous iconographic comparisons show how this animal was known throughout the whole Roman empire. It is arduous to define a precise chronological attribution in our sculpture, however it is possible to set our artefact within the II-III century AD, when coloured marble became more commonly employed for carving statues and architectural elements.