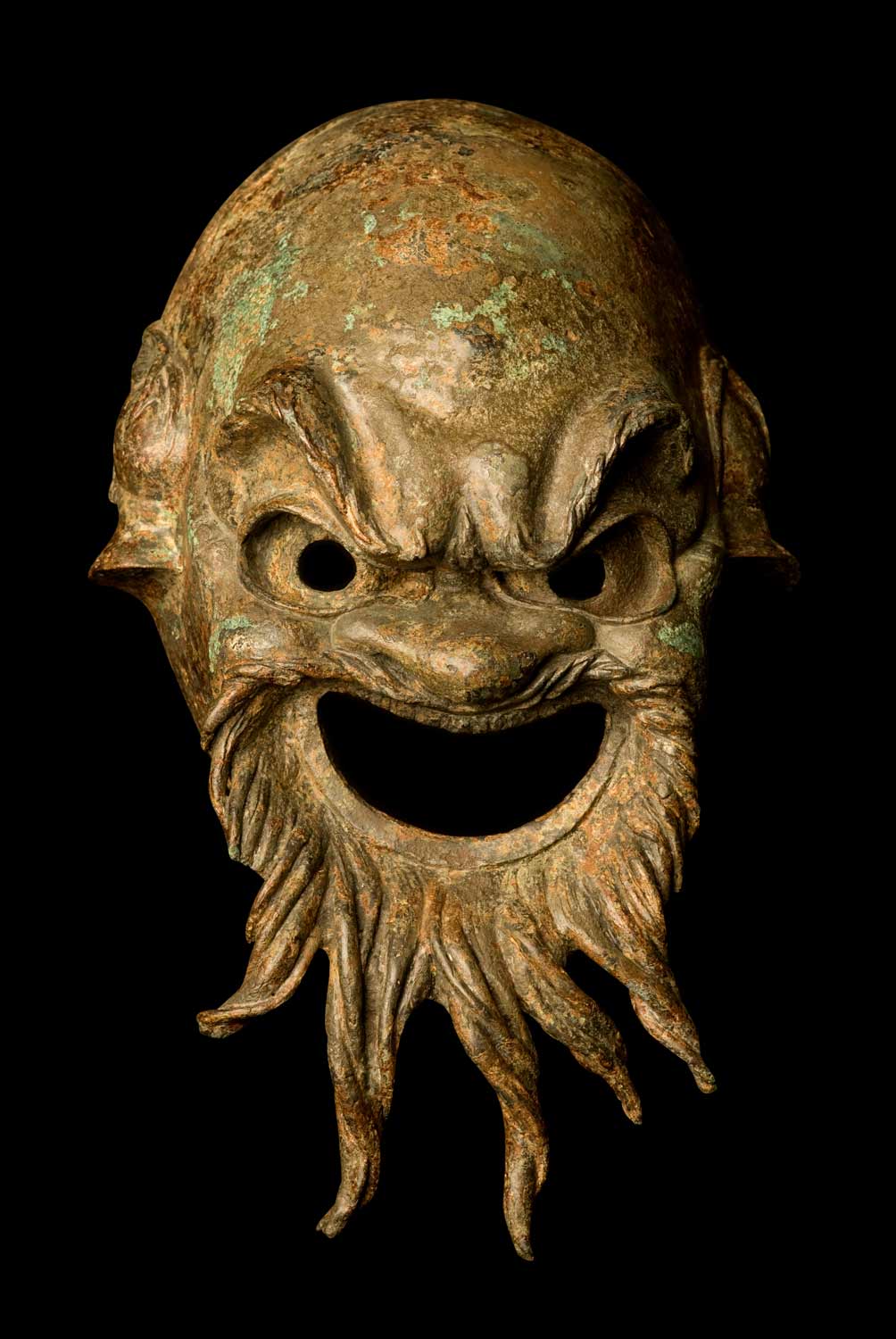 The bronze mask is a unicum in Greek-Roman artistic production. As is evident in the surface concretions on the back not entirely eliminated during previous cleanings, it was found in the sea. It was displayed and presented to the public for the first time at the museum headquarters of the National Museum of Rome in Palazzo Altemps in occasion of the exhibition promoted by the Fondazione entitled “The Smile of Dionysus”. According to the research of Eugenio La Rocca it depicts Papposilenus (in “Il sorriso di Dioniso”, Turin 2010, p. 127-173): a semi-wild being with a round face dominated by a thick, disheveled beard and a completely bald head. The subject depicted is the oldest Silenus (the meaning of his name) and the wisest of the Dionysian court; in fact, it was he who was entrusted with little baby Dionysus. He lives in the forests, detests civilized society and participates in processions and banquets, singing in a melodious voice. Based on choral songs dedicated to Dionysus in the Archaic Age these songs caught on during the Classical Age of theatre performances, tragedies, satyr plays and then the commedia where they were recited by masked actors. One of the masks used in satyr plays was that of Papposilenus, which, over time, acquired the same general appearance of the masks of the commedia with increasingly grotesque forms. As considered by La Rocca the mask, of extremely fine workmanship and exceptional size, is one of the rarest examples in bronze dating from the Hellenistic age, perhaps around the first half of the 1st century BC. It is completely hollow on the backside, making it extremely light. Two quadrangular holes on the edges of the ears probably served to hang the mask with a looped ribbon: it is thus likely that it was originally displayed in a peristyle with a garden in a rich residence, the mask fluttering between the columns, hung by plant garlands to complement the numerous other decorative elements in the environment including references to Aphrodite/Venus (love) and Artemis/Diana (the hunt). Everything focused on recreating an atmosphere of momentary freedom from the worries of daily life and rarefied serenity.