Cuirassed statue of a Roman commander 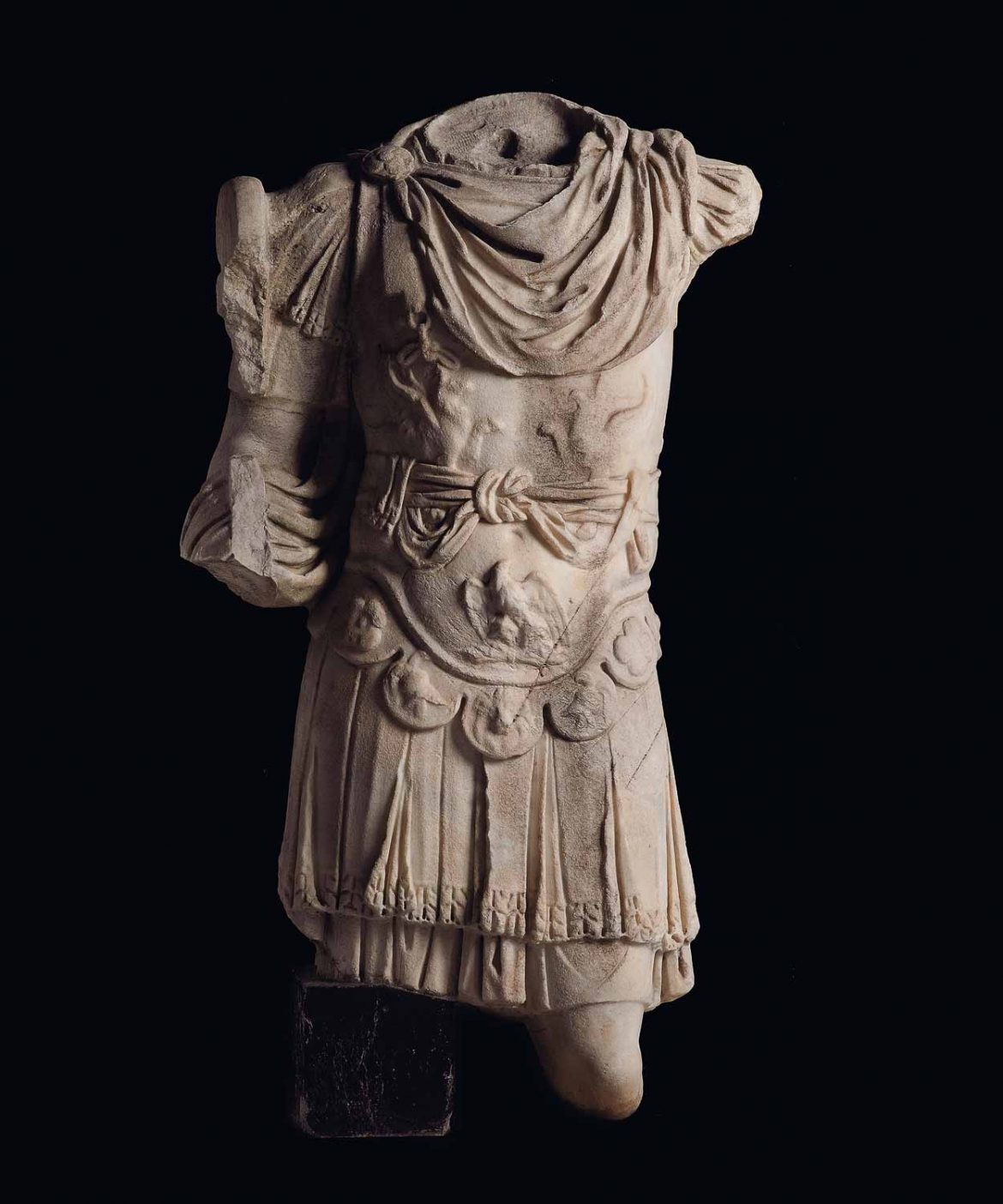 Cuirassed statue, over life-size, of a Roman commander (emperor?), standing, devoid of the head and both arms and legs. The left knee, slightly bent, is partially preserved, while the right leg, which bore the weight, is now completely lost; the left arm must have been parted from the body, as the remnants of the shoulder suggest, while the right arm, almost fully preserved, is bent and attached to the body, and it bears a gladius with scabbard, of which the hilt is visible.

The finely carved statue wears an anatomical cuirass, held together by means of leather straps, and a large paludamentum (military cloak) which, once pinned over the right shoulder with a fibula (buckle), fell over the shoulders and was draped around the right arm. A thin tunic is visible under the cuirass; the latter is characterized by two lines of pteryges (small plaques): in the first row, which follows the curvilinear shape of the armor, they are short, semicircular and alternately decorated with a four-petal rosette and a crustaceous (?), with a lion’s head on the central plaque; the second row is made of longer leather straps with fringed ends, realistically rendered by means of an overlapped arrangement. The cuirass is engraved with a pair of heraldic affronted griffins, partially obscured by the cingulum vitae (commander’s sash) knotted at the front and with tucked ends; it is a decorative motif that comes into fashion in the second half of the II century AD. In the lower part of the armor, we find the imperial symbol, an eagle with wings spread wide resting on a thunderbolt. The rear of the sculpture appears to be unfinished and only roughly worked out.

This cuirassed statue falls into the artistic program of glorification of commanders who hold the military power and celebrating their triumph, the latter being symbolized by the images engraved over the armor. Those decorative reliefs can be compared with the ones visible on a statue today in the Uffizi Gallery in Florence, and on a sculpture in the Antiquarium of Sessa Aurunca, both datable to the first half of the II century AD (Stemmer K., Untersuchungen zur Typologie, Chronologie und Ikonographie der Panzerstatuen, Berlin 1978).