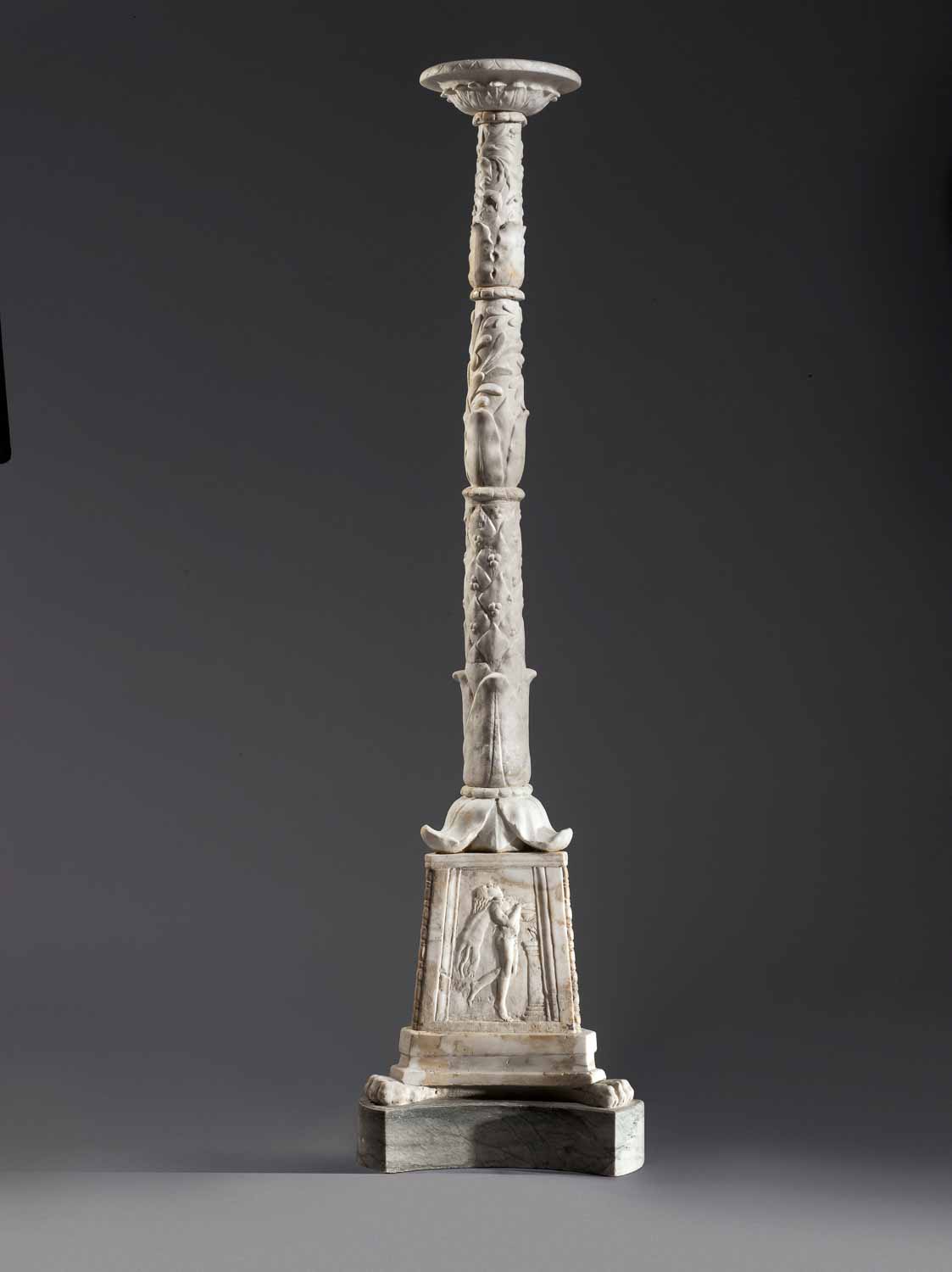 Marble candelabrum in excellent state of preservation, showing a well-structured decoration, typical from the Augustan age, on the whole surface. The upper disk is a restoration work. The triangular base has three panels, bordered on the corners by a pair of oval beads and funnels. There is a relief of a god inside each single box: in one Hercules covered by the lion skin, holds the clave in the left hand, grabbing the Hesperides pomes with the right one; in another panel a drunk satire dances with his head backwards, wearing a goat skin on his shoulder and holding a vase to be offered to the altar. On the third one a winged Eros is tending his bow, with a dress at his feet. The trunk of the candelabra consists of three parts: each one rises from a chalice of Acanthus. The first one presents a double chalice with two lines of opposite concentric crowns, divided by a small collar. The first trunk is decorated by lozenge leaves in alternating and over- lapping lines, spaced by groups of three berries. Then the second chalice of lanceolate leaves with two crowns follows, one with slightly curly edges and reverse top, while the other one presents leaves, tight to the surface. From the chalice develops a vegetal motif with olive tree branches and long well-molded leaves, wrapping on the truck. Lastly, there is the third chalice of lanceolate leaves with two crowns: the first one has mainly curly edges and reverse top, while the second one repeats the relief of the leaves tight to the surface. This last part of the truck shows floral motives, typical of Augustan age, such as roses, berries and ears, carved in a high plastic quality.

Hence the decoration of the candelabra is extremely various and rich of vegetal elements, but at the same time it keeps a formal balance and elegance typical of the Augustan age: in fact, the wealth of the elements never becomes overabundance, and the filling of the surface doesn’t turn into horror vacui. The shape of the marble Roman candelabras descends from the Etruscan incense burners of 6th and 5th century BC and later used by Greeks. They were not just votive objects, but they had a functional and decorative nature too, during the Augustan age. At the beginning these elegantly carved candelabras were commissioned to Greek ateliers and later they were carved by workers in Rome from the half 1st century BC. Our exemplar probably belongs to a lavish representative furniture from a rich domus.