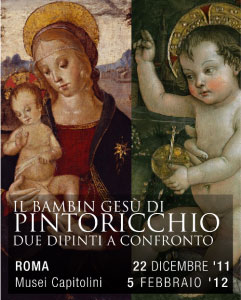 The exhibition of the two paintings by Pintoricchio celebrates Christmas and reminds all the enthusiasts of the delicate figure of the sensitive Umbrian painter, who was born in Perugia sometime between 1455-56 and died in Siena in 1513. The two works of art both belong to Foundations. A fragment of fresco with the figure of a Blessing Baby Jesus (property of the Guglielmo Giordano Foundation) stands alongside a small but precious panel depicting the Madonna with Blessing Child (property of the Sorgente Group Foundation, Institute for Art and Culture) The first masterpiece, dated at around 1492-1493, has a rather special story behind it that was accurately reconstructed by Franco Ivan Nucciarelli (Pintoricchio. Baby Jesus of the Hands Perugia, 2007). The second, placed under Italian Heritage preservation regulations for its exceptional cultural relevance in 1990, was exhibited for the first time in 1945 on the occasion of the Italian Art Exhibition at Palazzo Venezia This memorable event, organized immediately after the war, bore witness to the State’s concrete interest in the public and private artistic heritage, elevating them to the same level of dignity and protection. Subsequently the panel was displayed in 2008 in the Pintoricchio exhibition at the National Gallery of Umbria (in the catalogue edited by Vittoria Garibaldi and Francesco Federico Mancini, Francesco Ortenzi dated the painting as late fifteenth century). Finally it was published in the art collection catalogue of the Sorgente Group Foundation (Rome 2010) where Gian Maria Mairo dated it as being of the same period as the Bufalini Chapel. The fragment of fresco comes from the Chigi Collection where it was kept after being detached from its original position in Pope Alexander VI’s “cubicolo” or bedroom in the Vatican residence, where most probably Vasari saw it in its full splendor. The whole fresco, depicting Pope Alexander VI kneeling in front of the Madonna with Child, was detached in pieces but a copy of the fresco had been previously made by the seventeenth century Mantuan artist Pietro Fachetti, published by Nucciarelli. It was a work of art for delicate private devotion and the image, dear to the Pintoricchio, of the blessing baby was lovingly depicted so much so as to put the cheerful and profound character of the great Umbrian master under the spotlight. In the same way the panel, belonging to the Sorgente Group Foundation, is completely concentrated on the theme of blessing. The Madonna and the Child are looking downwards as if observing someone outside the boundaries of the painting, presumably the donator or the purchaser of the work of art, or, alternatively, there was an object of veneration to keep permanently under the protection of the Mother and Her Son. Appropriately Mairo identified the iconographic image of the Virgin as being the Stella del Mare (Star of the Sea) as recited in the Litanies of the Madonna and thus it is rightly believed to be a kind of votive offering or an apotropaic work of art referring to a seafaring figure. The probable proximity between this panel and Pintoricchio’s initial studies for the Piccolomini Library in the Cathedral of Siena could even lead us to associate it with one of the scenes depicted by Pintoricchio in the aforementioned library, that of the Pope Pius II Piccolomini’s preparatory rest in Ancona while waiting to board ship for the crusades against the Turks, a central scene in the fresco cycle. Even though we cannot demonstrate that the work of art was intended to protect the Pope or the other members of the expedition, the beneficial aspect of Pintoricchio’s art is evident. And for this reason Pintoricchio was considered more suited than others to send greetings and spiritual health to each one of us. (Claudio Strinati)