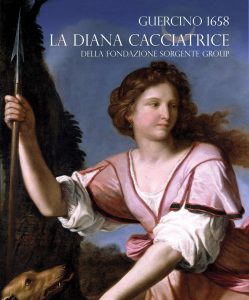 The Pinacoteca Civica of Cento shows for the first time an important picture by Guercino: “Diana the Huntress”, which returns to its native place after three centuries of travelling around Italy. The painting, belonging to Fondazione Sorgente Group, is on show from June 4th to July 10th within the event “Graditi Ospiti” (Welcomed guests) organized by the Council of Cento with the aim of promoting rediscovered Guercino’s works. This exhibition has been dedicated to Sir Denis Mahon who passed away on April 27 2011 at 100 years. That project was developed from an agree of Fondazione Sorgente Group and the Council of Cento. Fondazione has always shown an interest in 17th century Bolognese School and for Guercino particularly. The painting represents the goddess Diana while she’s stopping her run after spotting the shepherd Endimione sleeping. That painting was part of a pair. On the lost péndant, was represented the beautiful shepherd asleep; today we know the iconography of that painting thanks to a workshop copy, preserved in the Vasari corridor, in Palazzo Pitti, Florence. Guercino painted “Diana the Huntress” in 1658, for the Earl Fabio Carandini in Roma. The nobleman was originally from Modena but I moved to Rome in 1608. In 2009, Fondazione Sorgente Group acquired the painting during an auction, promoting immediately a restauration work which brought it back to its original splendor.