Germanico and the Augustus’ dynasty 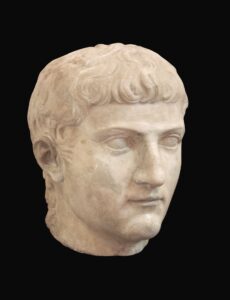 For the two-thousands years anniversary of Germanicus death (19th AD – 2019) Fondazione Sorgente Group celebrates the prince appointed as future emperor, from Julio-Claudia gens, prematurely dead, of whom Fondazione owns one of his most important portraits in Parian marble, from Gabii type, datable around 19-23 AD. The portrait of Germanicus will be shown from 19th December 2019, until 28 February 2020, thanks to a set-up curated by Paola Mainetti, Vice-president of Fondazione Sorgente Group, supported by Valentina Nicolucci, curator for the Archaeology. Explanatory panels are showing the noble dynasty and the life of the young prince, together with copies of the imperial portraits of the other young princes belonging to Fondazione Sorgente Group, appointed by Augustus to succeed himself. A multimedia film completes the exhibition, to remember the young prince historical figure. Appointing Germanicus as future emperor, Augustus would have realized his dream of uniting the two most prestigious families in Rome, leaving his throne to a young man who managed to achieve a great success amongs the roman armies and the people. Germanicus was the son of Antonia Minor (daughter of Octavia, Augustus’ sister) from gens Julia and of Drusus Major (son of Livia, Augustus’ wife) from Gens Claudia; therefore he unified the fates of two of the most important families of Rome. Augustus considered Germanicus as his deserving heir, because of his several military success and the love the people shown him. He was born in Anzio in 15 BC and called Germanicus because his father’s military success, commander in Germany from 12 to 9 BC. Germanicus, appointed to the Empire throne succeed with the name of Julius Caesar Germanicus, never become emperor. He married Agrippina Major, daughter of Agrippa and Julia (daughter of Augustus) and they have nine sons, among them the future emperor Caligula and the future mother of emperor Nero, Agrippina Minor. The love for her husband brought Agrippina to follow him in military missions of the Renum legions from 14 to 16 AD. During one of those missions, Germanicus regained the honour of Rome, rescuing two of three emblems of the Varo legions which were slaughtered by Germans lead by Arminius, who betrayed the acquired roman citizenship during the Teotoburg battle in 9 AD. Then emperor Tiberius sent Germanicus in Syria in 18 AD where he died on 10th October 19 AD, probably poisoned by Gnaeus Calpurnius Piso, who was supposed to flank him on Cappadocia, Commagene and Cilicia government. His ashes returned to Rome by his wife Agrippina and posed in the Augustus’ mausoleum, after receiving great honors in December.