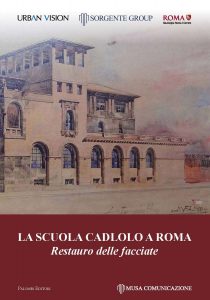 On 23 September at the Spazio Tritone the book-document of the first public-private fund raising was presented, “The Cadlolo School in Rome. Restoration of the facades”, published by Palombi Editori and Musa Comunicazione. A story in several voices, told by the people who conceived, promoted, welcomed, developed the project and the restoration works of the facades of the Cadlolo school in Rome, in Lungotevere Tor di Nona, between via della Rondinella, via del Mastro and via dei Vecchiarelli ., is presented at the Spazio Tritone With Elisabetta Maggini, Director of the Board of Directors of Sorgente Group, as moderator, the President of the Municipality of Rome I Center, Sabrina Alfonsi, the Councilor for educational and school policies of the Municipality of Rome I Center, Giovanni Figà-Talamanca, the Technical Directorate of the Municipality of Rome I Centro, Chiara Cecilia Cuccaro, the Director of Planning and Works Management, Paolo Rocchi and the Chief Executive Officer of Urban Vision, Gianluca De Marchi. The restoration of the school, built between 1921 and 1925 on a project by the architect Vincenzo Fasolo, is entirely financed with funds from private operators, made possible thanks to the display of advertising posters on the scaffolding necessary for the execution of the works. The book covers the stages of the partnership project between the Municipality of Rome I Centro, which promoted the intervention, and the Sorgente Rem and Urban Vision companies that came together in the Temporary Business Grouping (RTI) to give back to the citizens of Rome a common good, at no cost to the community. The restoration work on the facades, which began on March 5th and will end after 24 months, is carried out by Sorgente Rem, which is headed by Valter Mainetti’s Sorgente Group Italia – specialized in conservative restoration of prestigious properties – and by Urban Vision – Media Company, leader in fund raising, aimed at protecting the artistic and cultural heritage. The book aims to be the historical memory of the conservative intervention and documents the phases of cognitive deepening, the study of decay, the details of the technical project for the restoration of the surfaces, the architectural configuration of the building, the story of its designer, Vincenzo Fasolo and finally, the administrative process that started this innovative Project Financing for the recovery of a school building in the center of Rome, which boasts about one hundred years of history.