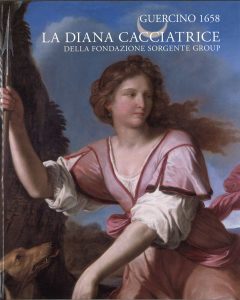 A catalogue promoted by Fondazione Sorgente Group for the exhibition of the painting by Guercino “Diana the Huntress” held in the Pinacoteca Civica of Cento, in the suggestive environment of the native place of the great baroque master. The catalogue carries out a deep study of that painting, shown to the public for the very first time, through few scientific contributes explaining the history and the iconography of the picture.