View of the Tiber at Castel Sant’Angelo 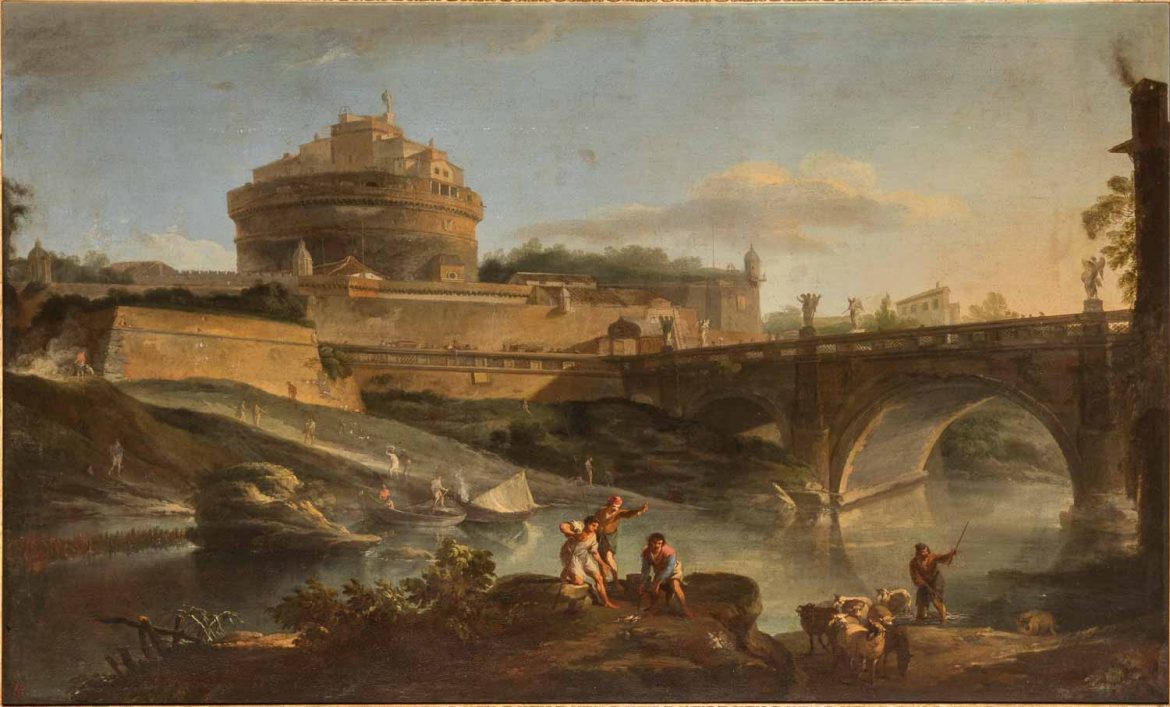 View of the Tiber at Castel Sant’Angelo

The Tiber peacefully flowing next to the high bastions of Castel Sant’Angelo: a dreaming atmosphere which brings us back to an archaic vision of the world, into a silence that no one can disturb, neither the humans nearby, busy with the boats and the cattle. The painter put his easel on the left bank of the river, next to Ponte Sant’Angelo, in front of the docks of the Borghi, where during the age of pope Paul V, the harbors were equipped with docks for the barges carrying the Travertine marble for the construction of Saint Peter Basilica. From that position, the ancient Mausoleum of the emperor Hadrian, which later was turned in the papal fortress, hosting the infamous pontifical dungeons as well, is observed from an unusual point of view, from down to up: a trick used to increase the majesty of the monument. It is in the search of this never ordinary perspective, that we find the distinctive peculiarities of the views of Andrea Locatelli, and, one of his rare views on the Eternal City. As explained regarding the other painting executed by him in this collection “View of the Colosseum with archaeologists and labors at work”, Andrea Locatelli lived in Rome during a period of great urban amendments: projects that modified considerably the aspects of the city, modernizing the infrastructures and the streets network. According to the historians, this is the period of the beginning of the archaeological excavations of the ancient Roman Forum, which was rediscovered together with the other monuments of the classic Age. Thus, the landscapes by Locatelli, together with other works painted by famous colleagues working in Rome in the 18th century as Van Wittel, Van Lint and Panini, have become true historic visual proofs, fundamental to understand the original aspect of the papal city and the changes occurring at that time. Despite the strong competition of the above-mentioned masters, who were all “foreigners”, arrived in Rome attracted by the rich commissions of nobles and the religious, the Rome-born Andrea Locatelli managed to enter firmly in the circle of the patrons of the city, thanks to the good relations and network of his friend and fellow Paolo Anesi, a roman-born himself. Anesi introduced Locatelli to the environment of the nobility permitting him to obtain his first assignments and making him soon familiar at the mansions of the Ruspoli, Albani, Ottoboni and Colonna families, who became his main sponsors commissioning him the decoration of their country houses. This explains why he was mainly concentrated on rural landscapes, capriccios and small “bambocciate”.

This extraordinary view of Castel Sant’Angelo, datable between the second and the third decade of 1700 can be considered a rare example in his artistic career. For his less familiarity with this kind of subject, Locatelli borrowed a set-up from Van Wittel for this composition, customizing it through a varied disposition of the figures (without disdaining to insert cattle on the landscape to increase the sense of reality) and giving the composition a rarefied and bright atmosphere, almost oneiric, very different from definitely more rational and monumental compositions of Van Wittel. Despite the high quality of the result, the production of realistic views by Locatelli remained limited to a few important paintings. Among these, the view of the Tiber at Castel Sant’Angelo belonging to Fondazione Sorgente Group, is certainly one of the most important.