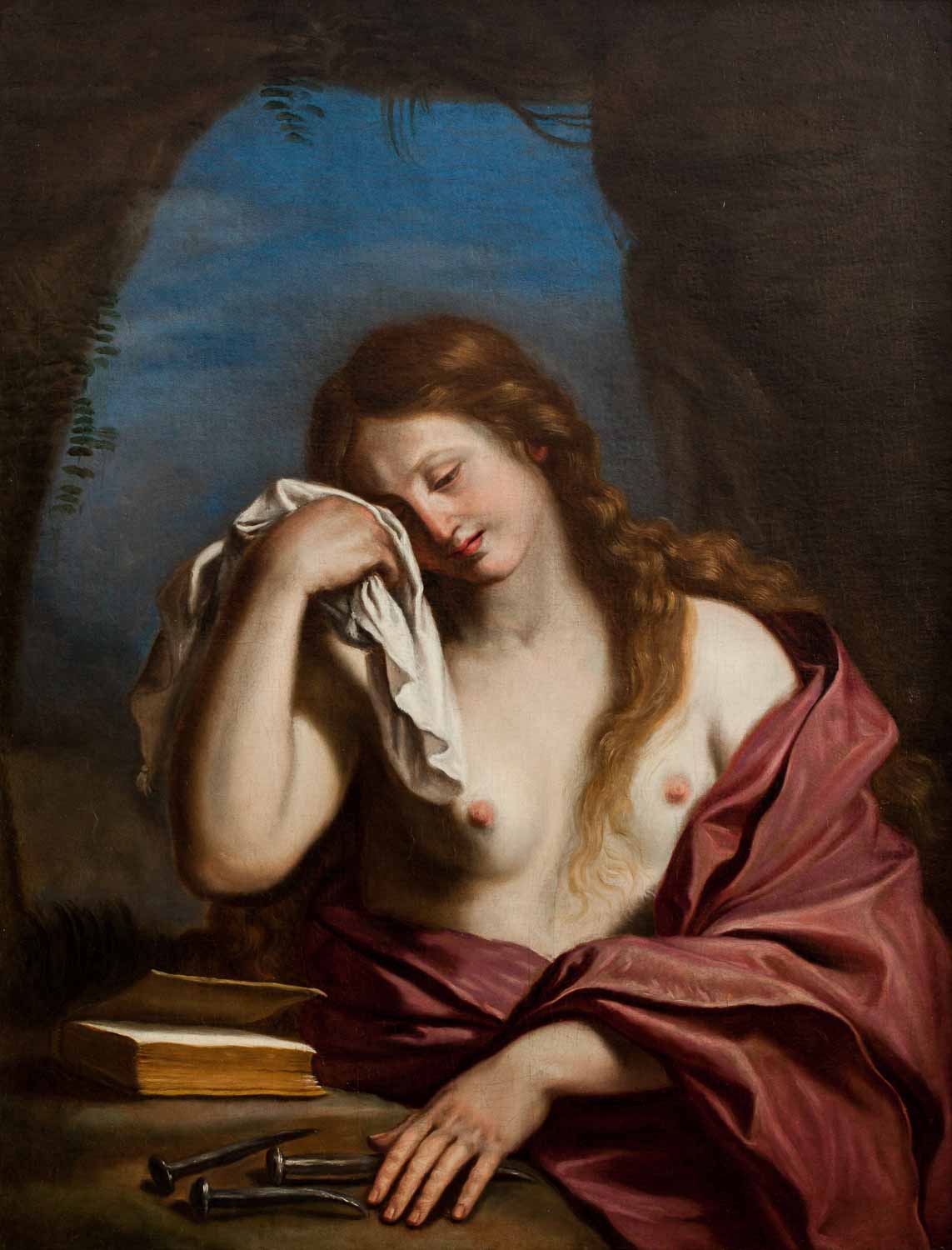 The painting shows a style which can be related to the more mature period of Guercino as suggested by the composition’s simplicity and the ascetic lines characterizing the saint penitent image. A peculiarity which was typical to another artist, very inspiriting for Guercino: Guido Reni. After 1642, Guercino effectively moved his workshop to Bologna, to replace the famous master just passed away as the principal master of the city. This change inevitably entailed an approach to the style of Reni, to not confuse the costumers already used to precise aesthetic standards. Furthermore, very typical of the late Guercino is the intense blue of the sky in the background, probably realized with precious Lapis lazuli powder. A tone used by the artist to emphasize the contrast and emphasize with the figure’s pale white skin and with the soft crimson mantle she wears. The image of the repenting Magdalene was a very popular subject in that period for the deep moral message emanating from that image, which influenced the Cento master as well which he depicted many times during his career, for the challenge of realizing a character full of contradictions, like blending the sensuality of a young naked body with sentiments like redemption and penitence which are here emphasized by elements linked to the Passion of Christ. None of Guercino’s compositions of penitent Magdalene directly repeats a previous one, although some are clearly variations of others. All those compositions have a common element: a particular care on realizing the hair of the saint, which is a fundamental iconographic element for Magdalene. In fact she used her long curls to clean and dry Christ’s feet, showing off her will of redemption as reported in Luke’s Gospel, in the episode of the “Dinner at the house of the Pharisee” (Lc 7, 36-50). Analyzing the “Account Book” (Libro dei Conti), Nicholas Turner has individuated this canvas within the commission for a pair of paintings requested by the Genoa nobleman Girolamo Panessi who paid Guercino 80 Ducatoni on the 14 January 1660. Which was a very particular year in the life of the old master almost 70: in fact he suffered a sudden illness, interrupting his artistic activity, forcing his assistants to finish all pending works.