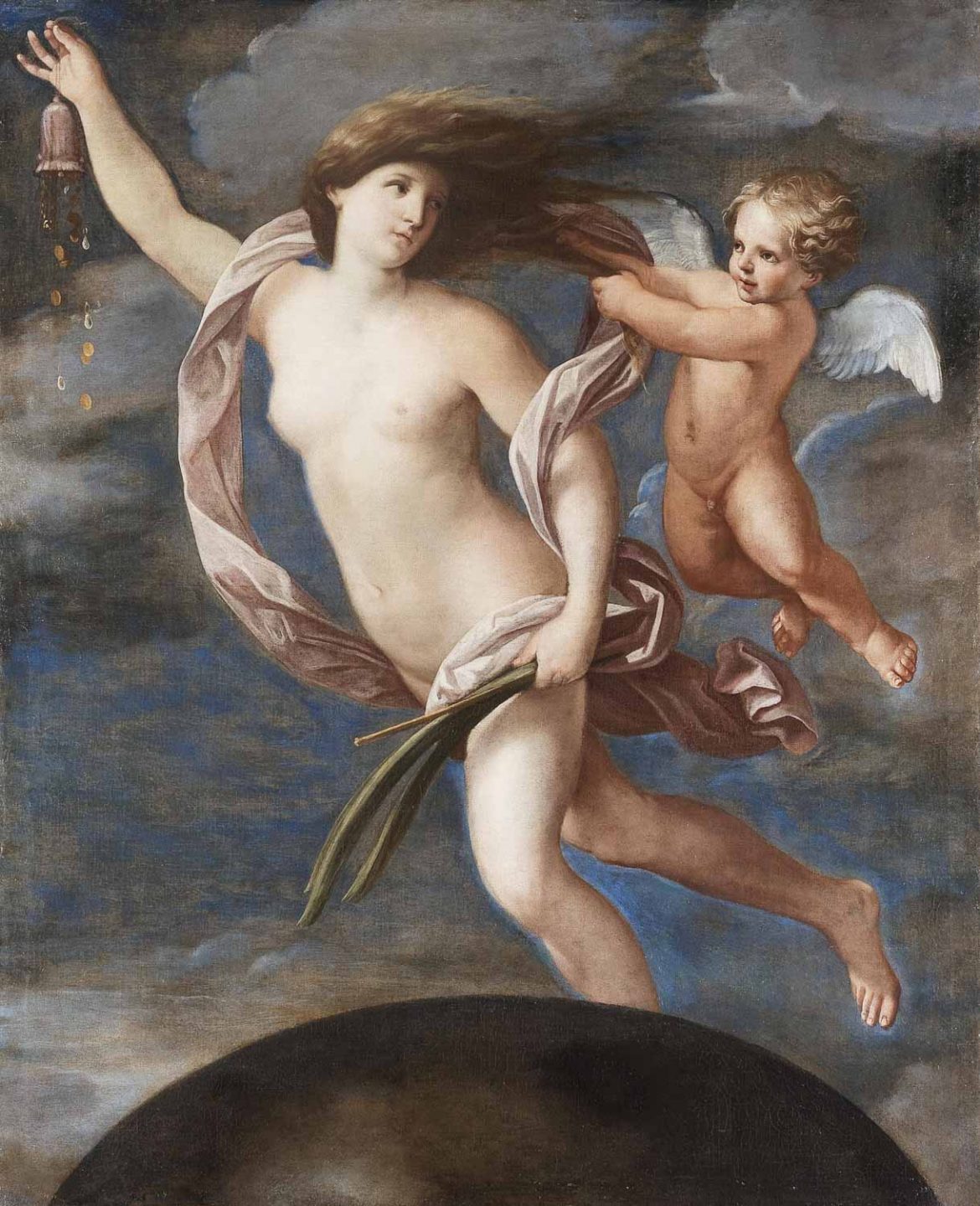 This composition is strongly allegoric and evocative. It shows a naked female figure floating in the air above a blue globe while a winged cherub holds her by the hair.

It was conceived by Guido Reni probably in 1623, when he created the first prototype for an important commission. This great artist from Bologna lived across the 16th and the 17th century, like the most famous Italian Baroque artists, and was at the peak of his artistic career at that time.

While painting this alluring subject, which has then become one of his most iconic ones, Guido Reni wanted to personify his passion for gambling, a vice that had dominated and negatively conditioned his life since an early age. It is in fact a metaphor for Fortuna, which is here represented as a young woman floating above a blue globe (the world) dropping generous gifts from a bag full of coins. On the right side, there is a young cherub holding her hair back, so that she cannot fly away.

This composition is extremely refined and was aimed at a well-read audience. Reni drew inspiration from an essay of that time named ‘L’Iconologia’ (NoT. Iconology) written by the Perugian Cesare Ripa and published during those years. His study was indeed the first complete work dealing with the artistic representation of allegoric figures as conceived in tra- ditional imagery. It focused on how to personify a specific concept and on the physical characteristics and gestures to be added to recall it immediately. The little cherub has always been associated with the idea of Amore, whereas the allegory of Fortuna has developed in different ways throughout history. In spite of continuous changes, Fortuna is one of the most common figures and managed to maintain some essential features which can be seen in this work. First of all, her bareness – wearing no clothes, she cannot be associated with richness, nor poverty, hence she does not discriminate on the basis of social class.

Another two essential elements are the coin-drop- ping bag (sometimes substituted by a cornucopia full of fruits and vegetables) referring to gifts for people she chooses to favour, and the globe above which the goddess moves. According to Cesare Ripa, the sphere ultimately represents her constant motion – she can turn her back to everyone, alternating good to back luck, but it also refers to the world, over which Fortuna exercises her power. The small stick she holds in her hand derives from an iconographic variation of the theme. In fact, the 16th-century painter Dono Doni had illustrated her as a woman suspended over a tree that she would beat with a stick so that gifts would drop. This allegory became so popular thanks to its well-wishing message that Guido Reni chose to replicate it more times. As a matter of fact, we now have three versions that can be ascribed to him: one is kept at the Vatican Museums, another one at the Accademy of San Luca in Rome (it has a crown instead of a bag though) and the third one belongs to a private col- lection.

This image was so successful that it was also used by the followers who attended his workshop. Giovanni Andrea Sirani was one of them and was very close to the maestro. He is actually the author of this painting, together with the help of his daughter Elisabetta. The shades used in this work are different to the ones used by Guido Reni. The palette of colours tends to be more toned down and less vibrant, yet the base drawing shows an extremely high quality, like those of Guido Reni. The style is more free from the influence of Carracci, which had almost ended by that time, but as a more Baroque influence to it. All these elements show that the painting was made later in time, probably around 1660, as also proven by the Cupid painted by Elisabetta Sirani. She was quite famous despite her young age, for she had practiced a lot over the years and had developed her own style in the realization of cherubs, a subject that had also been very dear to Guido Reni, from whom Elisabetta probably drew indirect inspiration, as he died when she was still a baby.